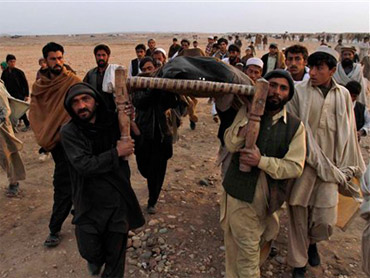 Taliban insurgents are carrying out more attacks this year than at any time since early in the war, killing increasing numbers of civilians as U.S.-led forces push into the militants' southern strongholds, an Afghan rights group said Monday.

International troops were responsible for about one-fifth of civilian deaths - down from previous years, thanks to restrictive rules of engagement that some soldiers feel put their own lives at risk.

That so many noncombatants are dying shows that the international force has yet to succeed in its goal of protecting the Afghan people, whose trust and support are key components of NATO's new counterinsurgency strategy in the nearly 9-year-old war.

At least 1,076 civilians died in the first half of this year, triple the number of international forces killed over the same period, the Afghanistan Rights Monitor said in a report that called 2010 the worst year for security since shortly after the demise of the Taliban regime.

Violence has soared as coalition forces, bolstered by 30,000 American reinforcements, move into Taliban strongholds in the south and east to try to wrest the areas from the militants, strengthen Afghan government control and win Afghans' trust. The insurgents have responded with a wave of ambushes, suicide attacks, roadside bombs and assassinations.

Afghanistan Rights Monitor director Ajmal Samadi said the group recorded 1,200 violent incidents in June alone, the most in a single month since early 2002. The number included coalition actions such as airstrikes against insurgents, but Samadi said the vast majority were attacks by the Taliban and their militant allies.

"Insurgents are certainly carrying out more attacks across the country than at any time before," Samadi said.

Fierce resistance had been expected in the south, but as reports of bombings and assassinations mount from all over the country, some ordinary Afghans are feeling increasingly uneasy.

"Unfortunately, I am hopeless with the current situation and I don't see a bright future," said Ahmad Fahim, 28, who works in the education ministry in Kabul.

Fahim has no trouble believing this year is the most violent since the war's early months. He said he and his friends see and hear the evidence in daily news reports on casualties - not only in the south, but in the previously calm north and west. He holds the Taliban ultimately responsible but says the U.S. and its coalition partners still kill too many innocent civilians, even if by accident.

Still, insurgents were responsible for 661 of war-related civilian deaths so far this year, or 61 percent. Of those, 282 were killed by roadside bombs, Afghan Rights Monitor said.

The Taliban's frequent use of homemade, hidden explosives on roads is just as likely to kill ordinary Afghans as security forces. The insurgents also target civilian government officials in a campaign of terror.

International forces were responsible for 20 percent of the deaths and Afghan security forces for 10 percent. The report said the remaining deaths were either unclear or attributed to criminal gangs or private security forces. The Afghan group compiles its statistics from interviews with witnesses, families of victims, local officials and media reports.

The share of accidental deaths by coalition and Afghan government forces - which can turn people against the government and foreign troops - is falling, the statistics showed.

Accidental deaths from NATO airstrikes dropped by half, to 94, and overall international forces were responsible for 210 civilian deaths from Jan. 1 to June 30 this year - down from 276 for the same period last year. Deaths attributed to Afghan security forces were down from 386 to 108.

Samadi credited the policy of restraint issued by former international forces commander Gen. Stanley McChrystal last year that severely limits the circumstances in which troops can call in an airstrike or fire into buildings.

He urged Gen. David Petraeus, who replaced McChrystal this month and who many credit with turning around the war in Iraq, not to change those rules of engagement. If American and other international troops are allowed to use firepower more frequently, he said, then they will. "Then you could be back in a situation where more civilians could die."

The strict rules of engagement are unpopular among many, including some troops who believe they cost American lives and force them to give up the advantage of overwhelming firepower to a foe who shoots and melts back into the civilian population.

NATO spokesman Brig. Gen. Josef Blotz, however, stressed that Petraeus is committed to the current guidelines for use of force.

"Our strategic imperative to reduce civilian casualties has not and will not change," Blotz told reporters Sunday.

Monday continued the trend in deaths of innocents: NATO reported that six Afghan civilians were killed and four were wounded when their car hit a roadside bomb in Helmand province's Lashkar Gar district. A coalition helicopter evacuated the wounded for treatment and came under fire from militants.

Various organizations track civilian casualties in Afghanistan, with differing numbers. Afghanistan Rights Monitor's statistics were higher than NATO's tally of 592 noncombatants killed in the first half of this year, 82 percent of them by insurgent attacks and the rest accidental deaths by international forces.

The United Nations' statistics also tend to be higher than NATO's. The world body has not yet released its report on casualties for the first half of the year, but in 2009 its count was similar to Afghanistan Rights Monitor's tally.