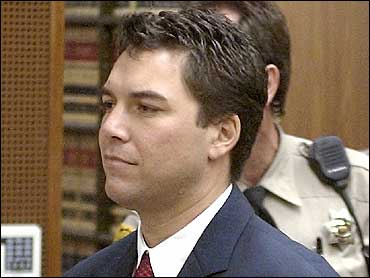 A police officer said Tuesday that he saw a bucket and mops in plain sight in front of Scott Peterson's home as officers began investigating his pregnant wife's disappearance.

The defense testimony is considered a counterpoint to a possible prosecution argument that Peterson mopped the kitchen after killing Laci Peterson on the night of Dec. 23.

Evers said there was no smell of bleach or other cleaning agents in the house, reports CBS News Correspondent Manuel Gallegus.

Other officers have reported detecting the scent of bleach in the kitchen.

Evers testified on the fifth day of a hearing to determine if Peterson, a former fertilizer salesman, will stand trial on two counts of murder for the death of his wife and unborn son.

Peterson, 31, told police he last saw his wife the morning before Christmas as he left to go fishing near Berkeley. He told them he returned to their Modesto home late that afternoon, shortly before family members reported Laci Peterson missing.

The bodies of 27-year-old Laci Peterson and her unborn son washed ashore along the San Francisco Bay in April, about three miles from where her husband said he was fishing.

Prosecutors are seeking the death penalty against Peterson.

On Friday, the couple's housekeeper, Margarita Nava, testified that she mopped the kitchen floor Dec. 23 with water and Pine-Sol. She said she put the mop outside to dry but put the bucket on top of the washing machine with rags that needed to be laundered.

On Monday, Scott Peterson's defense attorneys challenged the type of DNA analysis done on a hair found in his boat, saying the technique is too unreliable to be used in court.

Prosecutors believe the hair, found in a pair of pliers in the boat, could be from Peterson's wife, Laci. An FBI crime lab supervisor testified during the preliminary hearing last week that mitochondrial DNA from the hair matched a gene swab taken earlier this year from Laci Peterson's mother, Sharon Rocha.

Defense witness William Shields, a biology professor from the State University of New York at Syracuse, testified Monday that while mitochondrial DNA testing can be useful, it is not as precise as other types of DNA testing.

Mitochondrial DNA cannot specifically identify an individual, but if compared with samples taken from a family member, it can show the statistical likelihood that a hair or other tissue came from a certain person.

Peterson is charged with murder in the deaths of his 27-year-old wife and the baby boy she was carrying. The preliminary hearing is to determine if he will stand trial.

There is no evidence Laci Peterson was ever in the boat before her death, and prosecutors are expected to show that she did not even know about the vessel.

Mitochondrial DNA — a molecule that is much smaller than the more familiar nuclear DNA that is used to reveal a person's genetic makeup — helped identify victims of the World Trade Center attack. It can be extracted from hair and bones when little else remains of a body.

Testifying for the defense, Shields said he was "appalled" at the sample size used by the FBI, reports CBS' Gallegus.

Shields said there can be mutations or contamination of mitochondrial DNA that could skew results.

On cross-examination, Shields said he gets as much as 60 percent of his income from testifying for the defense in criminal trials and rarely works for prosecutors. He also said he had never extracted mitochondrial DNA for forensic purposes and is not a forensic scientist.

The hearing is being held because the technique has rarely been used in California courts. The prosecution must clear three hurdles to use the evidence. It must show that: the technique is accepted by forensic scientists, that the witness is an expert in the technique and that the testing and analysis were done properly.