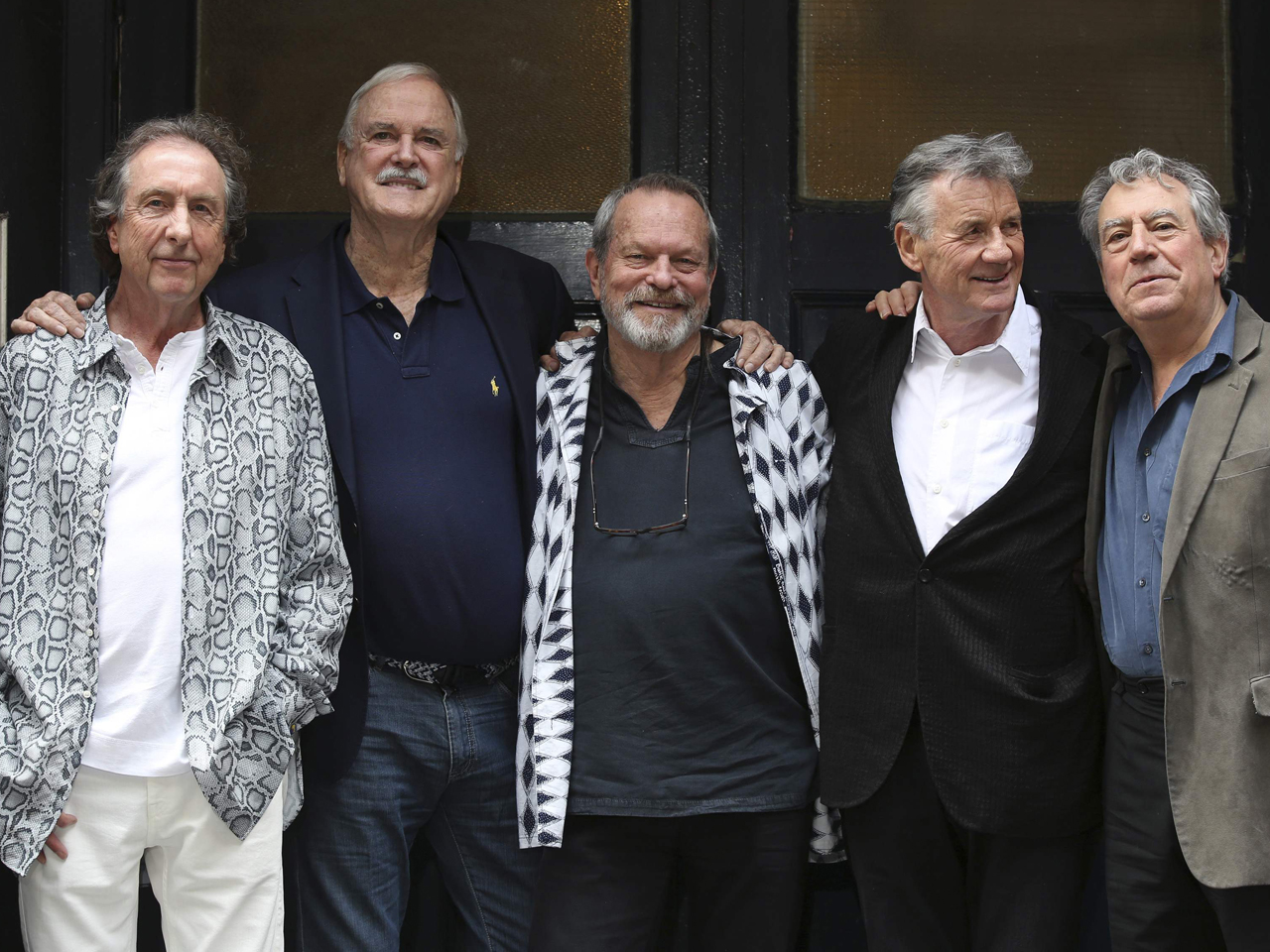 The five members of Monty Python -- who have not performed together on stage since 1980 -- said Monday their live reunion show at London's O2 Arena will be their chance to say goodbye to fans.

"That's really quite exciting," said Eric Idle. "It means you're actually going to say goodbye publicly on one show, and nobody ever has the chance to do that. The Beatles didn't get a last 'good night.'"

Idle, John Cleese, Terry Gilliam, Terry Jones and Michael Palin spoke at a press conference on the eve of the O2 farewell "tour." The live shows, which will play before audiences of 15,000, will feature classic Python sketches, including some (such as the Spanish Inquisition, or from their 1983 film, "The Meaning of Life") that have never been performed on stage.

The final live show on July 20 will be broadcast on U.K. cable, and viewable in cinemas around the world (including the U.S.), making it what Idle called "a world event."

In addition to comic bits and scantily-clad dancers, the show will feature songs from the Python back catalog. "We've brought back musical revue, which used to be a form in the '50s and nobody's ever done it since, probably for very good reasons," said Idle, the creator of the Tony Award-winning "Monty Python's Spamalot," who is directing the show. "But it works quite nicely because it means when we do a sketch, a song will break out.

Gilliam mused that it was "a very high-powered energetic show, especially for 70 year old men!" He described the show as an exuberant "pre-posthumous memorial service, with all the dancing and joy that one would hope for at a funeral." "Once you get to our age, people have bought tickets, they bought them because they like you," said Cleese. "They don't think, 'I can't stand that bunch so let's buy two tickets.'"

The Pythons also revealed that special guests will make appearances, including physicist Stephen Hawking, who is not only one of the most intelligent people in the world but also a Python fan.

The only missing Python is Graham Chapman, who died in 1989. Thanks to film, he will still have a presence in the show, including a part in the musical finale.

Cleese praised Chapman, his longtime writing partner who fulfilled the central roles in "Monty Python and the Holy Grail" and "Life of Brian," as "a very, very good actor; he was stronger than any of us."

Michael Palin noted another quality of Chapman's, that he was always late: "He couldn't do Shakespeare because he'd arrive halfway through the third act."

As a bit of history, the July 20 show will be the group's very first live TV performance -- as well as its last.

And then that's it. (Except for the Blu-ray release in November.)

The Pythons will continue to pursue their own careers, which have diverged following "The Meaning of Life" and the death of Chapman. Recently, Cleese has performed a solo show, dubbed the "Alimony Tour," to help pay off his divorce settlement. Gilliam just directed a Berlioz opera and a film, "The Zero Theorem." Jones is planning to shoot a film based on Tchaikovsky's "Nutcracker" in Toronto. And Michael Palin, a notorious world traveler, said he has been sleeping.

But there will always be a role for a Python. Cleese said, helpfully, "I have a five-point peace plan for Syria, if you like."

To watch Mick Jagger's take on the Python reunion, click on the video player below.

Kirsten Dunst on "The Power of the Dog"
David Morgan