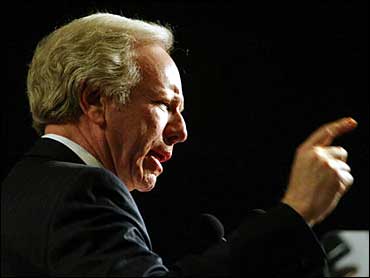 Sen. Joe Lieberman has asked his rivals for the Democratic presidential nomination to agree to participate in one nationally broadcast debate a month starting in July.

"If we all agree that the Democratic primary should be one of ideas, let's all agree to appear regularly before the voters on television in media-sponsored, neutral debates that have the potential of reaching the widest possible audience," Lieberman campaign director Craig Smith wrote in a letter to the managers of the other campaigns.

"Doing so would not only help ensure that the voters hear our voices, but that the Republican Party is not permitted to dominate the political debate with its fund-raising resources and with the media power of the presidency."

The Democrats had their first debate this month in South Carolina and have received dozens of requests for future debates, said Lieberman spokesman Jano Cabrera.

Smith suggested the monthly debates be sponsored by the media and agreed upon by the campaigns.

The letter comes as recent polls show many Americans cannot identify some of the Democrats seeking the nomination or know little about the candidates.