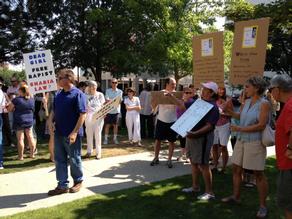 (CBS) Protesters converged on the Yellowstone County Courthouse in Billings, Montana Thursday and called for the resignation of a judge who handed down a 30-day sentence in the case of a teacher who raped a 14-year-old student, reports CBS affiliate KTVQ.

The girl killed herself in 2010 at age 16 as the case was pending, and her mother told District Judge G. Todd Baugh Monday her relationship with the teacher was a "major factor" in her suicide.

Baugh handed down the sentence Monday after former Billings Senior High School teacher Stacey Rambold, 54, was terminated from a sexual offender treatment program that was part of a deal to have his prosecution deferred. The judge said he wasn't convinced that the reasons for Rambold's termination from the program were serious enough to warrant a 10-year prison term recommended by prosecutors. If the former teacher completed treatment and complied with other conditions, the case would have been closed.

In handing down the sentence, Baugh also said the 14-year-old victim was "older than her chronological age" and "as much in control of the situation" as the teacher. The comments drew outrage from advocates across the country and have prompted intense media coverage of the case.

Thursday, protesters held a moment of silence for the victim, called for an end to "victim-blaming" and urged Baugh to step down, KTVQ reports.

Organizer Sheena Davis told CBS News' Crimesider the protest was organized by advocates and citizens to send a message to Baugh that his comments won't stand.

"I made some references to the victim's age and control," he told KTVQ Tuesday. "I'm not sure just what I was attempting to say at that point, but it didn't come out correct. What I said was demeaning to all women, not what I believe in and irrelevant to the sentencing."

However, he stood by his sentence.

A moveon.org petition calling for the judge's resignation had received more than 30,000 signatures by Thursday afternoon. The Yellowstone County Attorneys office is reviewing the case, reports the station.

"She wasn't even old enough to get a driver's license," Hanlon said in a statement released by her attorney. "But Judge Baugh, who never met our daughter, justified the paltry sentence saying she was older than her chronological age. I guess somehow it makes a rape more acceptable if you blame the victim, even if she was only 14."

"My faith in the justice system is gone," she tearfully told KTVQ.

Complete coverage of the Montana rape case on Crimesider