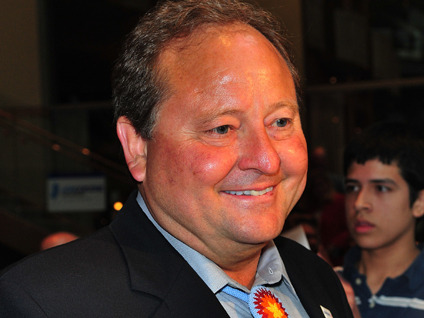 Montana Democratic Gov. Brian Schweitzer has come up with a memorable way to veto bills coming out of his state's Republican-led House and Senate: By ordering a cattle brand that says "VETO" and then holding a public ceremony to use it on the GOP legislation.

Schweitzer stood in front of the state capitol Wednesday and put the bills, one by one, on display. He then used a hot brand on each one, lighting the paper on fire and burning the word "VETO" into the wooden plank behind the bill. You can see video of the event at left. (Things get good around the 4:45 mark.)

Schweitzer, who said the bills defied the will of the state's residents, used three different brands depending on the nature of the bill. Bills he considered frivolous, for example, got poked with a "calf brand."

The bills that got the veto-brand ranged from "elimination of same day voter registration to a bill that would allow new open pit gold and silver mining using cyanide leach process," according to the Great Falls Tribune.

Also vetoed were a bill to repeal the state's voter-backed medical marijuana law, one that defines "scope and boundaries of human sexuality/reproductive education in K-12 public schools," and one blocking the creation of a health insurance exchange under the federal health care reform law.