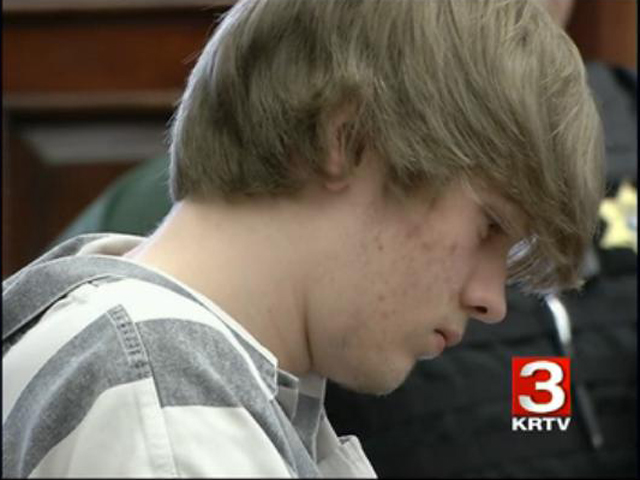 GREAT FALLS, Mont. - A Great Falls teen who pleaded guilty to luring an 11-year-old girl into an alley, raping and choking her has been sentenced to 75 years in prison.

According to CBS affiliate KRTV, Kuebler was 15 when he beat and raped the victim, who was on her way home from school, in October 2012.

The girl, now 12, testified that she felt like she was going to die during the attack and that she would “never forget” what happened to her, according to the station.

"I want him to go away for a long time," she said.

Sandra Kuebler-Riggs testified that her grandson had a difficult upbringing, saying his now-deceased mother was cruel and inflicted physical and emotional abuse on the boy. Kuebler lived with his mom until he was 10.

"I basically thought she was a sociopath," Kuebler-Riggs said.

Public defender Betty Carlson called Kuebler a "broken boy," who fell through the cracks in the system.

Kuebler had reached an agreement in September to enter an Alford plea to sexual intercourse without consent, but Pinski rejected the agreement, saying he wanted Kuebler to plead guilty. The next day, as Kuebler was being escorted to the courtroom, he threw himself over the third-floor balcony and fell about 13 feet, hitting his head on the floor below. He was hospitalized with critical injuries.

"In a weird way my, my attempt at suicide was trying to make up for what I did," Kuebler said Wednesday, adding that he'd accept "whatever sentence you give me without complaint."

Kuebler pleaded guilty in October and prosecutors agreed to recommend a 60-year prison sentence with 30 suspended.

"It is very clear to this court that the public will not be protected unless Mr. Kuebler is incarcerated for a lengthy term," Pinski said, citing a "substantial lack of impulse control that reveals itself in horrific violence."

Pinski handed down the harsher sentence and ordered Kuebler to pay $135,000 in restitution for the girl's counseling expenses.

"It is terribly unfortunate," he added, "that Mr. Kuebler's life went so wrong, so early."