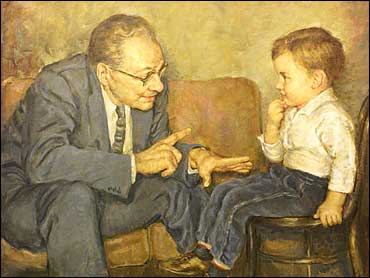 For six months, Mary Nixon and 10 other orphans were relentlessly belittled for every little imperfection in their speech to test the theory that children become stutterers because of psychological pressure.

Nixon, now 76, and some of the other test subjects sued the University of Iowa earlier this year over lifelong psychological problems they say stem in part from the 1939 experiment.

The case has not only thrown a spotlight on an experiment some participants bitterly call the "Monster Study," it has also illustrated the way research ethics have evolved over the years.

"I don't think anybody today likes the idea of seeing orphans, children, used that way," said Jane Fraser, president of the Memphis-based Stuttering Foundation. "But it's really important to keep things in historical perspective."

The experiment was overseen by Wendell Johnson, a distinguished University of Iowa speech expert who set out to unravel the mystery of stuttering by trying to induce the disorder in orphans.

At the time, he believed stuttering was learned behavior attributable to external forces, such as parents' criticism of their children for even the slightest speech imperfections.

None of the test subjects became stutterers. But that has done little to temper the anger they have felt in the three years since they learned what was done to them.

The lawsuit, brought on behalf of three test subjects and the estates of three others, seeks unspecified damages.

The university issued an apology after the study was made public in news reports. But the state also asked a judge last month to dismiss the case, claiming that the state is immune from such lawsuits under 1939 law.

Many speech experts and therapists agree the experiment was highly unethical by today's standards, but not necessarily by the standards of the day. And they say the case has done little to diminish Johnson's pioneering achievements.

"From the 2003 perspective, he conducted a hugely unethical project," said Arthur Caplan, head of the University of Pennsylvania's bioethics center. But 60 years ago, ethical rules did not exist, and experiments were done using minorities, disabled children or prisoners "because you didn't think of them as morally equivalent to others."

"At the end of the day, how does that affect the historical standing of people who did these things?" Caplan asked. "I think we should not cover it up. I think we should be honest and forthright about the mistakes of our pioneers. Whenever they're honored, it should be discussed. Does it take down their standing as pioneers? No."

In recent years, other controversial studies have come to light that used unwitting subjects to test such things as radiation exposure or the progression of disease.

From 1932 to 1972, the federal government used poor blacks in Tuskegee, Ala., to see what would happen to men when their syphilis was left untreated. Congress passed rules in 1974 requiring informed consent for subjects of government-funded medical studies.

Johnson, who grew up a stutterer himself, was one of the nation's foremost experts in speech disorders when the field was in its infancy. He held a doctorate in psychology and speech pathology and was director of the university's speech clinic from 1943 to 1955. He died in 1965.

He wrote numerous books and more than 100 journal articles on the topic, served as editor of at least two prestigious journals and wrote the entry on speech disorders for the Encyclopedia of Mental Health.

The University of Iowa's institute on speech and hearing disorders carries Johnson's name.

Stuttering afflicts one in 100 people, and modern theories say it is has a mix of neurological and genetic causes. It typically appears in children between the ages of 2 and 5.

The Iowa study, led in part by graduate student Mary Tudor Jacobs, involved 22 youngsters — all of them considered normal speakers — from the Iowa Soldiers' Orphans' Home. One group of youngsters received positive speech therapy; those in the other group were subjected to rapid-fire badgering and were repeatedly told were they were stutterers.

Nothing in the study indicated any of the subjects became stutterers. But researchers concluded that those in the negative therapy group showed a loss of self-esteem and other detrimental effects seen in adult stutterers.

In court papers, attorneys claim Nixon, widowed and living in a retirement home, spent her life believing that she had a speech problem and struggled with insecurities. She now is a recluse, attorneys say.

In addition to Nixon, those suing include Kathryn Meacham, 70, and Hazel Potter Dornbush, 79. All three women still live in Iowa. Their lawyers have rejected repeated requests to interview them.

The Iowa lawsuit accuses researchers and the university of hiding their findings, lying about the experiment to the orphanage and doing nothing to reverse the damage.

Fraser and University of Iowa researchers say Johnson's archive contains letters and memos urging staff members to check up on the study's subjects. And Jacobs, who lives in California, has expressed deep regret about the experiment and said she returned to the orphanage three times in the 1940s to try to reverse any problems with the youngsters.