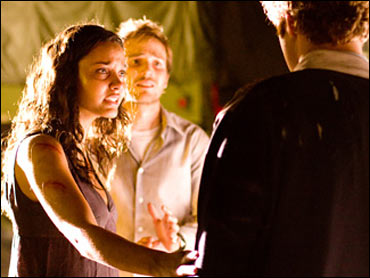 The monster hit "Cloverfield" scared up some $41 million in its opening weekend, a

But the creature feature is making some moviegoers sick -- literally.

"That movie was crazy. I got nauseous while I was watching," one customer just out of a Manhattan theater told CBS News. "It made me nauseous, completely nauseous," said another. "Someone ran out of the theater throwing up, and he was really sick ... to his stomach," said yet another.

Much of "Cloverfield" was shot with handheld cameras, and many scenes are very shaky. There's also quite a bit of whooshing motions onscreen, produced as cameras quickly scan from one point to another.

All that adds up to a not-too-pleasant experience for some people. Some theaters have posted warning notices alerting customers of possible side effects from "Cloverfield."

Ironically, those patrons are feeling in real-life the title of a famous Alfred Hitchcock thriller, according to one specialist.

"What these people are experiencing is really vertigo," Dr. Michael Stewart, an ear nose and throat specialist, explained to Early Show co-anchor Harry Smith Friday. "Vertigo is the sensation of movement when there is none. That can happen because of a medical condition like an inner ear infection, where your inner ear tells your brain you're moving, but your eyes don't see movement, so you feel disoriented, nauseated, and so on. What's happening in this movie apparently is that there's so much movement on the screen that your eyes are seeing that actually -- the disconnect is that your position sense in your body and your inner-ear say you're not moving, and yet your eyes are giving you the strong input that you're moving, which is what gives you the vertigo or the feeling."

At home, Stewart says, you can see the walls and get grounded as you watch TV, so the vertigo effect isn't produced.

Stewart, who's affiliated with New York Presbyterian/Weill-Cornell Medical Center in New York, says the effect is "absolutely" worse as you get closer to the screen.

"Some people," he added, "have that problem even in movies that are not as dramatic with motion (as "Cloverfield"). The closer they sit to the screen -- you lose perspective that you're in a room that's not moving. And all you see is something that's moving, and it bothers you. Imax movies can do the same thing."

Another movie a few years ago, "The Blair Witch Project," had a similar affect on people, Smith pointed out.

What can be done about it?

"If you're really prone to motion sickness," Stewart advised, "you probably should avoid this type of movie. A couple things you could try -- (it might help) if you sit farther back in the theater and try to occasionally look away from the screen, look at the surrounding walls, the surroundings to sort of get your perspective that you're not actually moving.

"Taking a sort of over-the-counter vertigo medications might help.

"It's still a situation where, if you're prone to it, you know, you may still feel it, although it may make it better. And most of those medicines are actually sedating. So don't want to be too drowsy during the movie."

Another alternative, Stewart says, is simply renting the movie and watch it at home on the small screen.