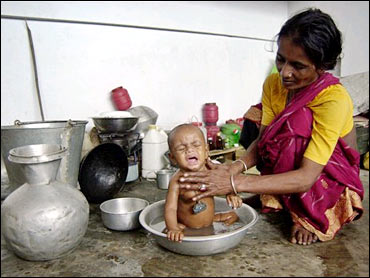 Thirty-nine bodies were found floating in receding flood waters in eastern India, officials said Monday, as the death toll from this season's monsoon rains across South Asia rose above 2,000.

The toll already is well above last year when 1,500 people were killed during the monsoon, which usually runs from June through September, though last year continued into October.

At least 1,191 people have died in India, 694 in Bangladesh, 124 in Nepal and five in Pakistan, bringing the toll to 2,014, according to figures supplied by authorities in each country and compiled by The Associated Press. Victims have mostly died from drowning, mudslides and waterborne diseases.

In northern India's Himachal Pradesh state, 20 workers were rescued Monday after being trapped for a day in a tunnel being built as part of a power project, said engineer Nirmal Prasad. The tunnel's entrance had been blocked by mudslides.

Also in India's north, in Himachal Pradesh state, authorities completed evacuating nearly 1,000 people from 15 villages that are likely to be submerged if a lake in neighboring Tibet region bursts its banks.

Even though rains in the mountainous region stopped Monday, "the threat persists," regional deputy commissioner Manish Garg told The AP.

The 3.5 mile-long lake last overflowed in 2000, killing more than 100 people and washing away dozens of bridges and roads.

The 39 bodies of the monsoon's latest victims were recovered from flood waters across Bihar state, said government official Upendra Sharma.

In western India's Gujarat state, a flood-swollen river continued to feed into an overflowing dam and 30 villages downstream have been put on alert for possible evacuation because they may be flooded, said S.K. Mahapatra, the administrator at the 360-foot-high, newly built dam.

The flooding in Gujarat has devastated the groundnut, cotton and sunflower crops of some 300,000 farmers in the region, said state Chief Minister Narendra Modi.

In Bangladesh, the Food and Disaster Management Ministry reported Monday that three more people had died from waterborne diseases.