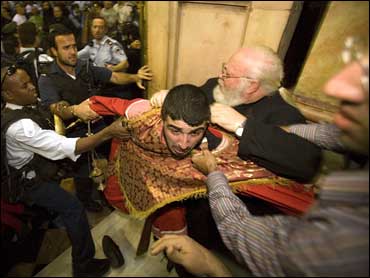 Israeli police rushed into one of Christianity's holiest churches Sunday and arrested two clergyman after an argument between monks erupted into a brawl next to the site of Jesus' tomb.

The clash between Armenian and Greek Orthodox monks broke out in the Church of the Holy Sepulcher, revered as the site of Jesus' crucifixion, burial and resurrection.

The brawling began during a procession of Armenian clergymen commemorating the 4th-century discovery of the cross believed to have been used to crucify Jesus.

The Greeks objected to the march without one of their monks present, fearing that otherwise, the procession would subvert their own claim to the Edicule - the ancient structure built on what is believed to be the tomb of Jesus - and give the Armenians a claim to the site.

The Armenians refused, and when they tried to march the Greek Orthodox monks blocked their way, sparking the brawl.

Police spokesman Micky Rosenfeld said police were forced to intervene after fighting was reported. They arrested two monks, one from each side, he said.

A bearded Armenian monk in a red-and-pink robe and a black-clad Greek Orthodox monk with a bloody gash on his forehead were both taken away in handcuffs after scuffling with dozens of riot police.

Six Christian sects divide control of the ancient church. They regularly fight over turf and influence, and Israeli police are occasionally forced to intervene.

"We were keeping resistance so that the procession could not pass through ... and establish a right that they don't have," said a young Greek Orthodox monk with a cut next to his left eye.

The monk, who gave his name as Serafim, said he sustained the wound when an Armenian punched him from behind and broke his glasses.

Archbishop Aristarchos, the chief secretary of the Greek Orthodox patriarchate, denied his monks initiated the violence. 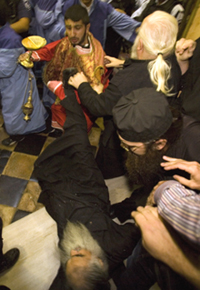 (AP Photo/Bernat Armangue)
(Left: Armenian and Greek Orthodox monks scuffle next to the site traditionally believed to be the tomb of Jesus Christ, Nov. 9, 2008.)

After the brawl, the church was crowded with Israeli riot police holding assault rifles, standing beside Golgotha, where Jesus is believed to have been crucified, and the long smooth stone marking the place where tradition holds his body was laid out.

The feud is only one of a bewildering array of rivalries among churchmen in the Holy Sepulcher.

The Israeli government has long wanted to build a fire exit in the church, which regularly fills with thousands of pilgrims and has only one main door, but the sects cannot agree where the exit will be built.

A ladder placed on a ledge over the entrance sometime in the 19th century has remained there ever since because of a dispute over who has the authority to take it down.

More recently, a spat between Ethiopian and Coptic Christians is delaying badly needed renovations to a rooftop monastery that engineers say could collapse.
By Associated Press Writer Matti Friedman