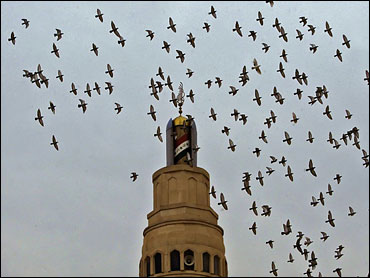 
Some day we will be forced to deal fully with the war we are in, and when that happens we're going to discover a lot of very nasty problems about the future of America. One of them has to do with, of all things, the First Amendment. Consider this story from Wednesday's London Times:

An American al Qaeda operative who was a close associate of the leader of the July 7 bombers was recruited at a New York mosque that British militants helped to run.

Investigators reportedly found that Mohammad Sidique Khan had made calls to the mosque last year in the months before he led the terrorist attack on London that killed 52 innocent people. ...

Mohammad Junaid Babar, one recruit from the Masjid Fatima Islamic Centre, has told U.S. intelligence officials that he met Khan in a jihadi training camp in Pakistan in July 2003. He claims that the pair became friends as they studied how to assemble explosive devices.

Babar, 31, a computer programmer, says that it was at the Masjid Fatima centre that he became a radical.

It's interesting that British jihadis came to Queens to recruit Americans — and no doubt some of them, fully trained in slaughter, have returned to these shores — but the important thing is the mosque. Because there's always a mosque, as my Italian friend Magdi Allam has been repeating for several years. Not all mosques are jihadi, but all jihadis come from a mosque.

Look at the 9/11 terrorists, look at the killer of Daniel Pearl, and you will find well-off, educated men who became radicalized in a mosque. And I'll bet you a good-sized farm that if we ever get to the bottom of 9/11, we'll discover that mosques were central in maintaining contact with and discipline over the terrorists.

So mosques can be very dangerous places when the local imam preaches jihadism, as is done in the thousands of Saudi-sponsored Wahhabi mosques all over the world, including the United States. It is clearly a matter of some urgency to put an end to the sort of indoctrination and recruitment that took place at the Masjid Fatima Islamic Center in New York. But that is easier said than done, because the absolutist interpretation of the First Amendment protects the imams and the incendiary sermons preached at such mosques. Freedom of religion forbids the state from meddling in the religious activities of the mosques, and freedom of speech forbids the state from telling the imams "you can't say that."

Freedom House should get a medal for publishing what I believe to be the only serious analysis of the contents of the literature distributed by some of these frightening places, and Nina Shea, who has driven this research for years, should have one personally engraved. As a result of this excellent work, along with that done by, inter alia, Steven Emerson, Daniel Pipes, Diana West, and Robert Spencer, we have a pretty complete picture of the dimensions of this threat. And as the London Times story illustrates quite convincingly, this is not just a theoretical matter. The evil words translate into evil action.

The all-out defenders of free speech and free religion will say that we are only entitled to go after the evil actions, because it is a greater evil to suppress the words and the thoughts that accompany them. Repressing these people and these words and thoughts today will make it possible for somebody to repress us and our thoughts and words tomorrow. I've got a lot of sympathy for that view, which I held throughout the Cold War with regard to Communism. And yet it seems suicidal to say "hands off all the mosques," knowing that the radical mosques will manufacture slaughterers. Jefferson has some deep thoughts on both sides of this question.

As I say, it's a very nasty problem. There are several things we can do right away, however, until some brilliant jurist finds a way through the fog. We can tell the Saudis to stop funding these fanatics. We can relentlessly expose the poison they are spreading (something useful for investigative journalists). We can challenge the doctrines in public fora. We can monitor the mosques, the better to spot the recruits.

But all this requires recognition that we are actually at war. At present, the most likely response from our leaders is to ask the Brits, Germans, and French to negotiate for us with the imams.

Michael Ledeen, an NRO contributing editor, is most recently the author of "The War Against the Terror Masters." He is resident scholar in the Freedom Chair at the American Enterprise Institute.

By Michael Ledeen
Reprinted with permission from National Review Online