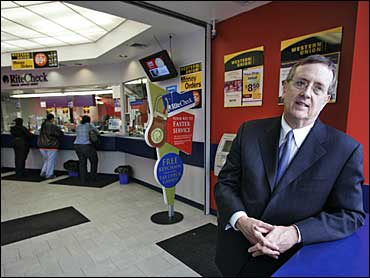 Grandma stuffing money under the mattress isn't the only one living outside the banking system.

As many as 28 million people in the United States are forgoing traditional financial institutions because of mistrust, cultural and language barriers or a belief that by the time all the bills are paid there will be nothing left for an account.

That can be expensive and risky. People can run up big fees to cash checks, pay bills and meet their other financial needs. Walking around with large amounts of cash can make them a target for thieves.

The bankless are estimated to earn hundreds of billions of dollars a year in income. Seeing a business opportunity, banks are trying to draw in these potential customers. So, too, are check-cashing businesses and retailers, including Wal-Mart.

Many people, however, still resist, preferring to remain in the financial shadows.

They tend to be minority — Hispanic or blacks especially — as well as low income and young.

According to the Federal Reserve, about one in 12 families — 8.7 percent — does not have a bank account.

The number is higher for the poorest — nearly a quarter of families earning less than $18,900, the Fed said, citing 2004 data.

For some, like Rosa Alvarez, the financial choices can be bewildering.

"I don't understand about this bank stuff," says Alvarez, 54, who lives in Texas. A nagging fear that she might make a mistake "if I don't keep up with it right or something" keeps her from opening an account. She had one once, briefly. But she had trouble keeping track of her balance. She thinks that when the account closed, she owed the bank $12.

Carlos Maren, 25, a cook, is afraid that if he opens a bank account in the U.S., he will get hit with fees for not keeping in enough money or for taking out more money than he has.

"My uncle sometimes says that it's expensive ... because if you don't have money in the account, (the bank) is going to be charging you," Maren says.

Leonel Mendoza, 32, a hospital worker, is not comfortable with banks in this country.

Both he and Maren do their financial transactions at a check-cashing outlet in the Adams Morgan neighborhood of Washington, D.C. They say it is convenient and they like knowing upfront what they will be charged to cash their paychecks, buy money orders, and, in Maren's case, wire money to his native Mexico. He has a bank account there.

"It's not real expensive," Maren says.

Yet those charges can add up.

A Consumer Federation of America survey of check-cashing outlets, found that on average it cost $24.45 to cash a $1,002 Social Security check last year. A blue-collar worker pays an average $19.66 every week to cash a $478.41 handwritten paper check.

Having a bank account can be expensive, too, if it is not managed wisely.

Failure to keep track of an account balance can incur a penalty of $20 to $35 each time a check is bounced or an account is overdrawn.

"It can be costly to be outside the banking system. The poor pay more," says John Caskey, economics professor at Swarthmore College.

"On the other hand, if all you did is take that low-income person, living paycheck to paycheck and moved them into the banking system and they are bouncing checks and incurring fees, you haven't done much and you may not have done them a favor," Caskey says.

Although there is no federal requirement for banks to offer low-cost, no-frill accounts, some do.

"Some have very low dollar accounts. Some have accounts that have to maintain a minimum balance," says James Ballentine, director of community and economic development at the American Bankers Association.

Ballentine's advice: "Do some shopping around."

The share of families without bank accounts decreased gradually from 1989 to 2001, then leveled off, the Fed said.

Banks have an economic interest in reeling in people outside the banking system — 10 million to 28 million individuals who earn $510 billion a year — and turn them into customers who eventually may need loans to buy homes, cars and other items.

Banks are working through community groups to ease fears, build trust and to educate people about financial options. It is a challenge that can take years, bank officials say. Moreover, what may work in Houston does not necessarily prove fruitful in Fresno, Calif.

Adding to the challenge, the bankless are slowly spreading out. Hispanics and immigrants have moved beyond traditional ports of entry, such as big cities on the coasts and in border states; they are settling in Tennessee, North Carolina and Indiana. In the same way, people without bank accounts have move around.

The FDIC has spearheaded a project to help bring the bankless into the financial mainstream. Financial institutions, community groups and others are teaming up in nine markets — including parts of Alabama, Chicago, Los Angeles and Wilmington, Del. — to provide services including affordable small loans, check cashing, savings and financial education and for wiring money outside the U.S.

Nationwide, there are fewer banks in poor neighborhoods versus wealthy ones but the difference is small, according to the Federal Reserve.

In some neighborhoods, however, there are no banks conveniently located. Federal banking regulators just weeks ago identified 3,500 middle-income neighborhoods in rural areas — from parts of Clarke, Ala., to parts of Washakie, Wyo. — that they consider to be underserved by financial institutions.

Federal Reserve research found that the most common reason families gave for not having checking accounts was that they did not write enough checks to make it worthwhile. Many people said they did not like dealing with banks.

Some — regulators could not provide a percentage — are in the country illegally. Without some proof of identification such as a driver's license or a passport, they cannot set up a bank account.

Check cashers and other outlets give them a financial lifeline.

"You purchase the transactions you need, when you need them. Prices are posted. There are no surprises," says Joseph Coleman, president of Rite Check Cashing Inc., which operates stores in New York City's Harlem neighborhood and the borough of the Bronx.

New York is among the roughly two dozen states plus the District of Columbia that regulate check-cashing fees.

"We are like financial oxygen. People in our communities rely on us," says Coleman, who once worked for Citibank. He hires people who speak languages in addition to English, easing communications with the customer.

Is the average 2 percent fee that customers pay for cashing a paycheck too high?

I would say no," says Cynthia Vega, spokeswoman for the Financial Service Centers of America, whose members include check cashers. Customers pay for the convenience of having quick access to their cash, she says.

Over the years, technological innovations have spurred a range of products for people without bank accounts.

Some employers, not wanting to deal with the expense of paper checks, load employees' paychecks onto electronic cards that can be swiped at the supermarket, restaurant and other places or used to pay bills. These cards have federal protections, such as liability limits for unauthorized use, says Jean Ann Fox, director of consumer protection at the Consumer Federation of America.

Check-cashing outlets also sell electronic cards on which money from paychecks or a tax refund can be loaded. These cards on average cost $10.86, the federation says. Fox says some of these cards can carry usage fees and may not have the same protections by bank-issued debit or ATM cards.

Wal-Mart, the world's largest retailer, recently announced it will sell for $8.94 each a prepaid Visa debit card. This step is aimed partly at shoppers who do not have bank accounts. Those cards have protections against theft and loss.

Alvarez, a Texas cake decorator, does not bother with any of these options. She cashes her check for free at the supermarket where she works and hides her cash in books at home.

"When I need money for gas, I get a little bit out," she says. "When I pitch in for groceries, I get it out. But sometimes I'm scared the house can burn down. My money will be burned with it," she says. Or, there could be a break-in, she worries.

Some of the potential perils for the bankless include theft, forgetting where you stashed your cash or losing your money.

"If you have most of your money in a bank. You have protection. If you are carrying it all in cash, it is easy to lose, easy to be stolen and easy to spend," Fox says

In Prince William County, Va., there were 351 robberies last year and more than 40 percent involved Hispanic victims — many of whom were new to the country — who had large amounts of cash on them, says Police Chief Charlie Deane. Many of the robberies occurred on paydays — Thursday or Fridays.

"The criminal element is aware that many of these people do not put their money in a bank," Deane says. "Many of these individuals are living in conditions where they have to share common space, so they often don't have ways of securing their cash where they live. So therefore they carry the cash with them," he says.

The robbers, when caught, have told police they targeted the victims because "they knew they were carrying cash," he said.

There also is a long-term impact for those who opt to do without banks.

"The ability to sock away money for a rainy day and to cover emergency costs are enhanced if somebody is using a mainstream financial institution and begins to get on a pattern of regular savings," says Barry Wides, deputy comptroller of community affairs at the Office of the Comptroller of the Currency.

The ability to establish good credit through a bank is crucial to getting competitive interest rates on loans for homes, cars and other items. Those with spotty credit are charged higher rates.

Despite all her fears about banks, Alvarez says one day she would like to become a steady bank customer. She thinks it will help her build a nest egg and feel more financially secure.

"When I cash my check, I'd maybe put $25 in savings that would never get touched until something like an emergency happens," she says.

These U.S. companies are still doing business in Russia
Thanks for reading CBS NEWS.
Create your free account or log in
for more features.
View CBS News In
CBS News App Open
Chrome Safari Continue
Be the first to know
Get browser notifications for breaking news, live events, and exclusive reporting.