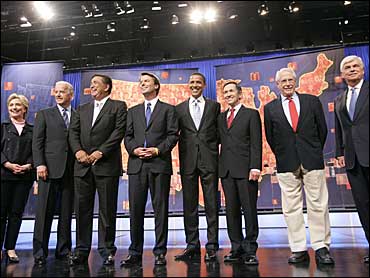 Let us establish a simple standard with regard to the race for the Democratic presidential nomination: Any candidate who raises more in a quarter than all the Democratic candidates did in a parallel quarter four years ago is doing just fine.

As such, both Illinois Senator Barack Obama and New York Senator Hillary Clinton had a great second quarter of 2OO7.

Obama did better, with $32 million raised. But Clinton did fine, with $27 million.

And what of the other contenders?

If we go by the money measure, former North Carolina Senator John Edwards, with around $9 million, may be slipping from the first tier that he has until now occupied with Clinton and Obama.

That, at least, is what the money-obsessed pundits tell us.

But grassroots activists should ask themselves a question about the money primary:

Why are the frontrunners raising so much money? Is it because they have the best ideas? The best bases of support?

Hardly. Clinton, who has been the strongest figure in the recent Democratic debates, is raising her money in big chunks from many of the same business interests that backed George W. Bush and other Republicans. Obama has a broader pool of givers, but the attraction seems to be his personal dynamism rather than his soft stands on the issues and his tepid debate performances — and he, too, is attracting a good deal of so-called "establishment" money.

In fact, as Republican presidential contenders struggle to keep up with the Democrats in the fund-raising race, there is much evidence to suggest that big-money interests are moving their chips to the Democratic table and placing their bets on Clinton and to a somewhat lesser extent on Obama.

Clinton and Obama are acceptable to those interests.

Edwards, in contrast, has taken strong stands and attracted a substantial number of small contributors. Unfortunately for Edwards, many of his strong stands challenge corporate power — in ways that neither Clinton or Obama has so far done. He's talking about the need to change free-trade policies that have cost the U.S. jobs and security, and he does not hesitate to suggest that corporations and the wealthy should pay their fair share of the nation's tax burden.

As a result, Edwards does not attract the "cushion" of wealthy, Wall Street-tied donors that the frontrunners enjoy.

The same goes for the even bolder candidacies of Ohio Congressman Dennis Kucinich and former Alaska Senator Mike Gravel. It should come as no surprise that the willingness of Kucinich and Gravel to speak truth to power makes it hard for them to raise money from the powerful.

The question for Democratic voters is this: Do they want to replace Bush with someone who is acceptable to the same people who gave us Bush? Or do they want a real change?

If the only measure is money, then the same monied interests that defined the Bush era will define the post-Bush era, whether the next president is a Democrat or a Republican.

But if the goal is to end the Bush era of misdeed and miscalculation, and to set a new course, then grassroots Democrats must look beyond the money primary — toward the ideals and idea primary where Edwards continues to be a frontrunner. That may be why, when delegates at state Democratic conventions have cast their straw-poll ballots — most recently in Wisconsin — Edwards has frequently come out on top.

It is certainly why, despite what the pundits would have us believe, we should continue to treat the 2004 Democratic vice presidential nominee as a serious contender. We'd be wise to do the same for Kucinich, Gravel and Connecticut Senator Chris Dodd, as well as for Republicans who have more ideas than dollars, such as Texas congressman Ron Paul. Big money has done a lot of ruin our politics, but it should not dictate who gets attention at a point when the only primaries that should matter are still months away.
By John Nichols
Reprinted with permission from the The Nation