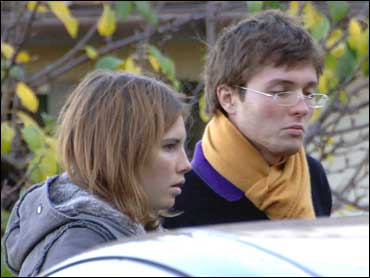 Italian police think money may have been involved in the murder of British university student Merideth Kercher, for which her former roommate, American co-ed Amanda Knox is presently jailed as a suspect.

CBS News correspondent Allen Pizzey, reporting the latest twists in the murder mystery in the university town of Perugia, Italy, says a diary seized from Knox's prison cell also, and for the first time, suggests that her Italian boyfriend may be guilty of the crime.

Until now, reports Pizzey, Knox has maintained she and Raffaele Sollecito did not kill Kercher. But in the 125-page handwritten diary entitled "My Prison," Knox reportedly wrote, "This could have happened ... Raffaele went to Meredith's house, raped her and killed her, and then, having come back home, pressed my fingerprints ... I was asleep ... onto the knife."

Knox adds that if it did happen that way, "I don't understand why Raffaele did it."

Knox's DNA was found on the handle of a knife that had Kercher's blood on the tip. The knife, which has not been officially identified as the murder weapon, was found in Sollecito's apartment by police.

Pizzey reports that a secretly-taped conversation Knox had with her parents seems to indicate she was at the house at the time of the murder, not with her boyfriend at his apartment as they have claimed.

Police have speculated that Rudy Hermann Guede, a native of Ivory Coast, may have fled to Germany using about $360 Kercher had withdrawn from a cash machine to pay her rent, reports Pizzey. The rent was apparently never paid. In another twist, Knox had about $310 dollars on her when she was arrested, opening up the possibility that the murder sprang from a row over money.

Guede was arrested in Germany after police caught him riding a tram without a ticket. Prosecutors in the southwestern German city of Koblenz agreed Monday to turn Guede over to Italy.

"The extradition can take place as soon as Italian authorities agree to a date for the handover," prosecutor Norbert Weise said in a statement.

Italian authorities say DNA tests confirm Guede had sex with the victim on the night of the slaying. Guede has admitted he was in Kercher's room the night she died but said he didn't kill her and that an Italian who is trying to frame him did, Biscotti has said.

Guede's lawyer, Walter Biscotti, said Monday that he did not know when Guede would be turned over to Italy.

In her diary, Knox reportedly makes no mention of Guede, or the other person connected with the case, Patrick Diya, a bar owner of Congolese nationality whom police have already released.

Pizzey says, whatever the case, Knox remains in a cell she complains is "cold", according to her diary. She says the only time she feels better is when she goes out for exercise, and can "sing and even shout."

So far, Knox still has tentative backing from the boyfriend she has now turned on. Sollecito wrote in his prison notes that he did not believe Knox did it, but adds that he is not sure she spent the whole night of the murder with him.