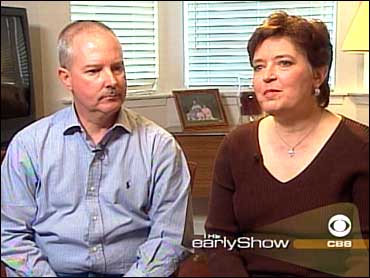 When people fall into a financial hole, sometimes they need a little help climbing out. So when The Early Show invited volunteers to take part in a monthly series, Money Makeover with Dave Ramsey, hundreds of families applied.

This time, help arrived for the Davis family of Fort Worth, Texas. Ramsey is a well-known financial guru and agreed to help them get out of debt and regain control of their money. The Early Show is keeping tabs on the process and found that Ramsey's advice came just in time.

Nina and Tim Davis have lived in Fort Worth almost all their lives and are raising two children, Laci, 16, and Lane, 14. But the past year has brought hard times.

"For about the last 10 months we've been trying to survive on basically one income because Tim was laid off from work," Nina said.

She makes $65,000 as a church administrator and Tim has taken a temporary job in a warehouse, but it's not enough. The family is behind on monthly bills, and their savings account is empty.

"And I think one thing that's plunged us further into debt is that we think, 'Well, you know, we'll just open up this line of credit because I know we're going to get another job soon,' " Nina said.

The couple has taken out two lines of credit from the bank, totaling almost $20,000. They also have about $9,000 in credit card debt, plus a mortgage and two car payments.

"I told Tim the other day, 'This is the kind of thing you read about happening to somebody else. It doesn't happen to you,' " Nina said.

And, as Tim described it: "Once debt starts stacking up against you and you have a hard time keeping up, you get into a situation where it's kind of like a mountain that you've got to climb to get over the problem. So, it's tough."

Help arrived at their door last month in the form of money wiz Dave Ramsey. He spent two hours with the couple, offering Tim tips on finding a job, and going over suggestions for trimming the family budget.

"Obviously, we've got to stop the bleeding. And we've got to get the budget to balance. And we're going to do that. There are several steps we can take," Ramsey said.

The first step was to cut credit card debt, and Ramsey meant that literally. Right then and there, he had Tim destroy his credit cards. But that was just the beginning.

"I've got really bad news for these teenagers," Ramsey said. "I'm going to rock their world. They're not going to like old Dave Ramsey."

Then it was goodbye to cell phones, premium cable, and as for Laci's Dodge Neon, Ramsey said it's a luxury the family cannot afford. She was instructed to either sell it or pay for it herself.

Ramsey recognized how hard this was for her parents.

"Probably your weak spot was anything that has to do with hurting the kids in any way, you would not pull the trigger on it, which is like the cable," he said. "If it was just the two of you, you'd have already cut the cable before Dave showed up."

Co-anchor Rene Syler checked in with the Tim and Nina Davis this morning, and was joined by Dave Ramsey. Congratulations were due, since Tim has found a new job, and Ramsey said they're on the road to financial recovery, but one step at a time.

Among those steps was a plan for grocery shopping, which included leaving the debit card and checkbook at home.

"When we get paid, we'll take money for two weeks out for groceries and for us that equates to about $300. We take the actual cash to the grocery store," she said. "It's been amazing because we've consistently saved $15 to $30 a month. It makes you think about what you're spending. And I think that it's helping us to stop some of the impulse spending we've done for years."

Ramsey has outlined three immediate goals for the Davis family: to establish a $1,000 emergency fund since they not longer have credit cards; to get current with their creditors; and to pay their real estate taxes, which are a year behind.

The Early Show will continue to follow the Davis family and their financial recovery. And to start your own Money Makeover, visit Dave Ramsey's Web site at www.daveramsey.com.