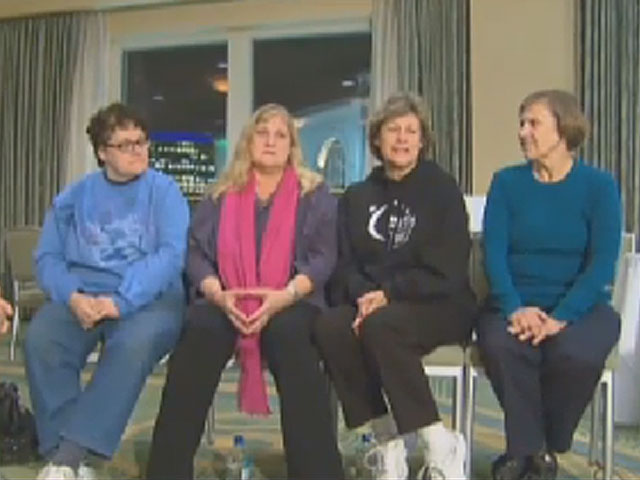 BOSTONThe Melnick sisters thought it was just a cruel coincidence that two of them were diagnosed with breast cancer.

But when two more sisters were given the same diagnosis, they came to suspect that a drug their mother took in the 1950s while she was pregnant had something to do with it.

The four sisters are now suing Eli Lilly and Co., the former maker of DES (or diethylstilbestrol), in a case set to unfold in federal court on Friday when it will become one of the first of scores of such claims around the U.S. to go to trial. The Melnick women are seeking unspecified damages.

"My primary concern is the awareness and at least educating the medical community and DES Daughters," Michele Melnick Fecho, who was 42 when she became the first sister diagnosed with breast cancer, told CBS Boston.

The numerous pharmaceutical companies that made or marketed the drug argue that no firm link has been established between breast cancer and DES, a synthetic estrogen that was prescribed to millions of women from the late 1930s to the early 1970s to prevent miscarriage, premature births and other problems.

The Centers for Disease Control and Prevention estimates between 5 and 10 million pregnant women and children were exposed to the DES.

It was eventually pulled from the market after being linked to a rare vaginal cancer in women whose mothers used DES. And studies showed the drug did not prevent miscarriages after all: The idea behind the drug before its 1938 launch was that miscarriages and premature births occurred because women did not produce enough estrogen naturally.

All four Melnick sisters had miscarriages, fertility problems or other reproductive tract problems long suspected of being caused by prenatal exposure to DES. Then in 2008, one of the sisters read about a study reporting an increased incidence of breast cancer in the daughters of women who took DES during pregnancy.

"That's when we really started to say, 'Wow, there really could be a link. It's not just in our head,'" said Donna Melnick McNeely, a special education assistant from Las Cruces, N.M., who was diagnosed with breast cancer at 49.

The sisters, who grew up in Tresckow, Pa., say they have compelling anecdotal evidence within their family: Their mother took DES while pregnant with Donna, Michele, Andrea and Francine. All had reproductive problems and developed breast cancer in their 40s. But their mother did not take DES while pregnant with the oldest sister, Mary Ann. She did not have fertility issues and has not had breast cancer.

"I'm sad for my mother who took this because she wanted to have us and wasn't explained the risks of what she took," Andrea Melnick Andrews told CBS Boston.

The CDC says potential side effects seen in so-called "DES Daughters" include the rare vaginal and cervical cancer clear cell adenocarcinoma, reproductive tract abnormalities like a T-shaped uterus, infertility and pregnancy complications such as ectopic pregnancy and early delivery.

Indianapolis-based Eli Lilly and Co. dominated the market for DES. The company argues in court documents that there is no evidence that the women's mother, Frances Melnick, even took DES. She and her doctor are dead, and the drug company says there are no medical records documenting her treatment.

The Melnick sisters are among 51 women who have DES lawsuits pending in Boston against more than a dozen drug companies. Mediation ordered by a federal judge failed to produce settlements. Jury selection in the Melnick case is set to begin Friday.

"We believe these claims are without merit and are prepared to defend against them vigorously," said Eli Lilly spokesman J. Scott MacGregor.

The Food and Drug Administration told doctors to stop prescribing DES to pregnant women in 1971 after a study found that the drug appeared to increase the risk of their daughters developing a rare vaginal cancer. Thousands of lawsuits have been filed since then alleging links between DES and vaginal and cervical cancer, as well as fertility problems. Many of those cases were settled.

Lawyers for the Melnick sisters cite a study published in the New England Journal of Medicine in 2011 that suggests the risk of breast cancer is nearly double in DES daughters over 40. The study, led by Dr. Robert Hoover, a researcher at the National Cancer Institute, found that the chances that a DES daughter will develop breast cancer by age 55 are about 1 in 25. For the average woman, it is about 1 in 50.

"This is a drug that was never adequately tested and never adequately warned," said Aaron Levine, a lawyer for the Melnick sisters and the other women who have sued in Boston. "There were no warnings at all, except in their literature they warned that it could be carcinogenic to the mother, but they never warned about the babies."

The four Melnick sisters were diagnosed with breast cancer between 1997 and 2003 and went through varying treatments ranging from lump-removal surgery to a full mastectomy, chemotherapy and radiation. They hope more women will ask their mothers if they took this medication.

Unfortunately there is no medical test to detect DES exposure, according to the CDC.

The CDC has more on DES-related health effects.