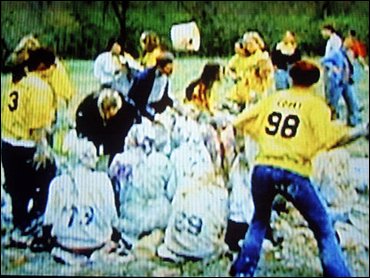 Two parents were charged with supplying alcohol to students at a suburban Chicago high school who participated in a brutal hazing incident captured on videotape.

Christine Neal, 49, was charged Wednesday with delivery of alcohol to a minor for buying three kegs of beer, two of which were found at the park where the hazing took place, prosecutors said. Marcy Spiwak, 49, was charged with allowing her home to be used for underaged drinking.

Neal is the mother of student Dominic Vargas, 18, who was charged with unlawful possession of alcohol by a minor. Authorities said Vargas brought the kegs to the May 4 "powder puff" event where junior girls were brutally hazed by seniors.

"The violence that we all saw on the tapes from the melee at Chipilly Woods was fueled by alcohol," Cook County State's Attorney Richard Devine said. "The adults who bought this liquor or hosted a party where beer was consumed will be held accountable."

Videotape of the event shows juniors from Glenbrook North High School being covered with mud, paint, feces and garbage as onlookers, some hoisting beer cups, cheered.

"I'm not a criminal. You've got the wrong person," a handcuffed Spiwak said as deputies escorted her through the Cook County courthouse.

Her attorney, Ralph E. Meczyk, said his client "has absolutely no knowledge" that there was any alcohol in her home during the party.

"Nothing improper was going on," he said. "This is a false accusation."

Devine earlier expressed frustration with residents of the upscale community, accusing them of stonewalling the investigation. On Wednesday he said others might be charged.

Vargas was among the 15 students who last week were charged with misdemeanor battery in the incident in suburban Northbrook.

Some 31 students — all but three of them girls — have received 10-day suspensions.

Several students have filed lawsuits appealing their suspensions. The students, their parents and attorneys also will be able to pursue appeals through school hearings scheduled Thursday and Friday.

Some juniors who were hazing victims also have been suspended from the prom and other extracurricular activities and could face further punishment. School officials would not say how many were disciplined.

The school board will meet Sunday to decide whether to expel seniors suspended after the hazing, while students consider a deal offered by the district under which they could graduate on time.

Under the deal, students still would be expelled and barred from the graduation ceremony, but the school would freeze their grades at their previous levels instead of automatically flunking them.

Local media reports students at the high school are circulating buttons that read: "Respect yourself. Respect one another." A local church has organized a "respect rally."