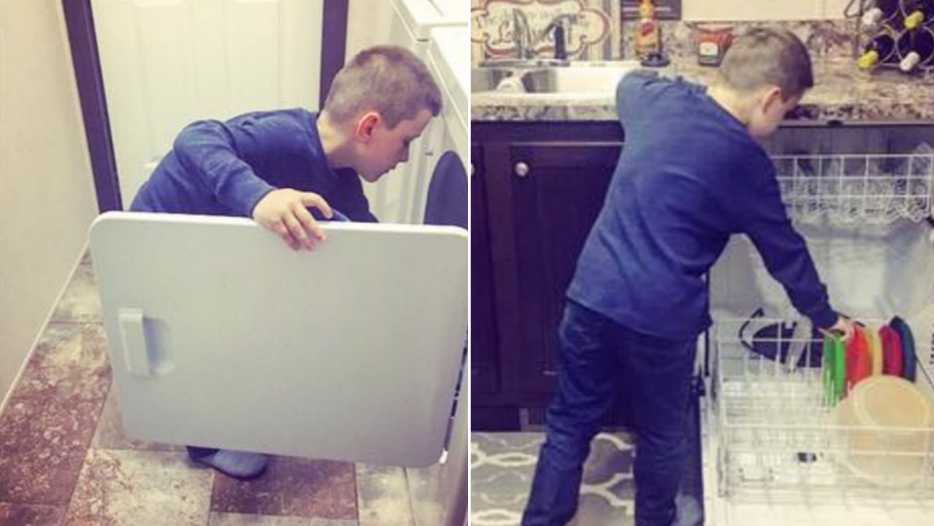 Whenever Nikkole Paulun is out with her group of girl friends she hears the same complaint: “What’s wrong with guys nowadays? They don’t do this...they don’t do that.”

The 23-year-old mother of two from Monroe, Michigan wanted to make sure that her 6-year-old son, Lyle, wouldn’t turn into just another one of “the guys.”

So, she started teaching him early on that household work isn’t just for women.

“My son will never be too ‘manly’ to cook or do chores,” Paulun explained in a Facebook post that has now gone viral with more than 56,000 shares. “He will be the kind of man who can come inside from changing a tire to check on his pot roast. Who can properly sort his laundry and mow the lawn too.”

Lyle started helping out around the house when he was 4 years old. Not just because he was told to do so, but because he enjoyed it, too.

Now, at 6 years old -- soon to be 7 -- Lyle gets a small allowance for everything extra that he does. The only required chore that he has to complete every day is clean his room and make his bed

In fact, most of the time he enjoys taking the time to organize his toys.

The mom hopes other parents who read her viral post will realize that it’s never too early to start teaching your kids valuable life lessons.

“The earlier, the better in my opinion,” Paulun says.

People seemed to agree with Paulun, some parents even shared pictures of their own children on the mom’s Facebook post.

“Hats off to you! And hope more and more parents take this approach,” one woman commented.

“I 100% agree with everything you just said! Way to raise a little gentlemen. One day his wife will thank you!” another wrote.

Paulun is happy that her post, which received thousands of comments, seemed to resonate with the majority of parents.

“Teaching my son how to do these things and be a productive member of society both outside the home and inside, starts with ME,” Paulun said.