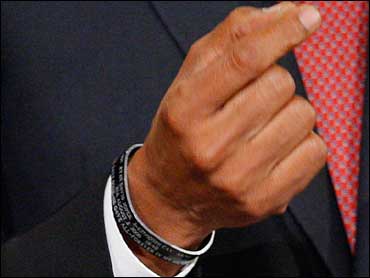 The mother of a Wisconsin soldier who died in Iraq says she was "ecstatic" when Democratic presidential nominee Barack Obama mentioned during Friday's debate the bracelet she gave him in honor of her son.

Tracy Jopek of Merrill told The Associated Press on Sunday she was honored that Obama remembered Sgt. Ryan David Jopek, who was killed in 2006 by a roadside bomb.

"I don't understand how people can take that and turn it into some garbage on the Internet," she said.

Jopek acknowledged e-mailing the Obama campaign in February asking that the presidential candidate not mention her son in speeches or debates. But she said Obama's mention on Friday was appropriate because he was responding after Sen. John McCain, the Republican nominee, said a soldier's mother gave him a bracelet.

"I've got a bracelet, too, from Sergeant - from the mother of Sergeant Ryan David Jopek, given to me in Green Bay," Obama said during the debate. "She asked me, 'Can you please make sure another mother is not going through what I'm going through?' No U.S. soldier ever dies in vain because they're carrying out the missions of their commander in chief. And we honor all the service that they've provided."

She wouldn't directly say whether she wanted Obama to refrain from mentioning the bracelet again, but said she hopes the issue will just go away.

"I think these bracelets should be looked upon as an honor that both candidates wear them to respect the troops," Jopek said. "My request to both of them is that they honor the troops by lifting the conversation to the issues, and that they continue to live up to the standards our military deserves."