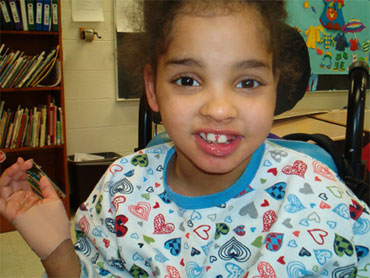 MINNEAPOLIS (CBS/AP) A special education teacher saw signs that something was wrong with her 10-year-old student. She was skinny, and sometimes the girl's diaper stayed dry all day, suggesting she was underfed. Her wheelchair was sometimes caked in ice, as if it had been left outside in the harsh northern Minnesota winter.

The teacher's lingering questions were answered three years later, when authorities charged Ludusky Sue Hotchkiss, 29, with second-degree murder and second-degree manslaughter in the 2006 death of her disabled daughter, Lakesha Victor. The girl weighed just 31 pounds when she died, and prosecutors allege her mother let her die by not feeding her enough for as long as four months.

"I was concerned, but I didn't have the proof," Lori Nohner-Johnson, a special education teacher in the Hinckley-Finlayson Elementary School who taught Lakesha for three years, said Tuesday. She would not comment on whether she raised those concerns with police, but noted all teachers are required to do so under state law.

"That year after she passed, there was a void. The kids missed her. We missed her. I still miss her and think about her frequently. It's good to think that something is in process."

It isn't clear what took so long for charges to be filed in the case. Pine County Chief Deputy Steve Ovick said only that it was a "very lengthy, involved investigation" that took nearly a year before the evidence was forwarded to prosecutors.

Hotchkiss, of Hinckley, Minn., was not arrested and authorities said she was expected to remain free until an initial court appearance on Sept. 29. A working telephone number couldn't be found for her, and court records showed she didn't have an attorney.

Authorities say a sibling found Lakesha dead on Aug. 20, 2006, at the family's duplex north of Minneapolis. Lakesha had cerebral palsy, autism and a seizure disorder. An autopsy found the girl died from malnutrition and dehydration. A criminal complaint said she also had pneumonia.

Lakesha couldn't feed herself and depended on others to provide her with nourishment through a feeding tube. The complaint said Lakesha's weight had dropped from about 50 pounds to 31 pounds in the months before her death. A change in body weight of more than 20 per cent in such a short period could be fatal, according to the charges in the complaint, which was signed by a judge Friday.

The girl's condition seemed to deteriorate once the school year ended in the spring of 2006, Ovick said.

The complaint said an investigator found that in the months before Lakesha died, her mother did not order enough of the child's food to sustain her and did not feed her enough. The investigator also found that Hotchkiss didn't pick up prescribed seizure medications.

The complaint also describes a messy house with bare mattresses on the floor of Lakesha's bedroom and dirty dishes and clothes scattered about. Hotchkiss told investigators that on most nights that summer, she was drinking enough alcohol to pass out, the complaint said.

"To me the worst part was that this child was nonverbal," Ovick said. "She couldn't even cry out for help."

Lakesha was supposed to have a personal care attendant — the brother of Hotchkiss' former boyfriend — but witnesses told police he was rarely at the home, court records say. The complaint alleges that Hotchkiss signed off on time sheets for the attendant, even though he didn't fulfil his duties caring for the girl, and the two allegedly planned to split his pay.

The attendant has not been charged, and a phone number for him could not be located.

Ovick referred questions about possible criminal charges for the attendant to the county attorney's office. Pine County prosecutors did not return multiple telephone calls Tuesday to discuss the case.

There were four other children, ages 2 to 11, living in the duplex at the time of Lakesha's death, according to the complaint. Ovick said the children were quickly removed from the home, and Hotchkiss voluntarily gave up her parental rights. Authorities said the children are doing well in foster care.