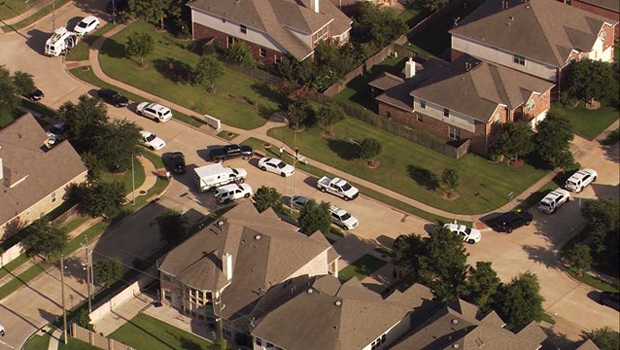 The incident happened about 5 p.m. Friday in front of a home on the fringe of the Houston suburb of Fulshear. Fort Bend County Sheriff Troy Nehls says a motive was still under investigation, but it appeared the shooting was the climax to a family argument.

Nehls says the daughters had already been shot when a Fulshear police officer arrived and saw the mother with a gun in her hand, apparently preparing to shoot one of her daughters again. The officer shot and killed the woman.

Officials identified the mother as Christy Sheats, 42, and her daughters as Taylor Sheats, 22, and Madison Sheats, 17, CBS affiliate KHOU reported.

"It's just crazy," Austin Enke, a neighbor who said he went to high school with one of the victims, told KHOU. "The neighborhood's never seen this kind of thing before. It's always quiet. This is surprising. They never showed any kind of thing that was wrong with them whatsoever."

Detectives told the station the woman's husband was in the home at the time of the shooting and ran to a neighbor's place for help.

"I think it would be shocking for anyone, anywhere, whether you're in Fort Bend or Harris or anywhere in the country." Nehls said.

Detectives also said they recovered a handgun from the scene and are looking into whether the mother fired at responding officers before she was shot.