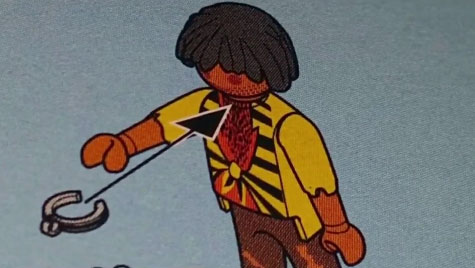 SACRAMENTO -- A mother in California is upset after she says her son's birthday toy came with what she considers racist instructions, reports CBS Sacramento.

Ida Lockett says the instructions on the play-set given to her 5-year-old son as a present say to shackle a dark-skinned character who appears to be a slave.

"He was excited when he got it," the mother explained to CBS Sacramento. "I spent the weekend putting it together."

And only after putting together the gift from his aunt did she see what her son was playing with. Pointing to a piece that appears to be a shackle and the dark-skinned play figure, Lockett said, "This right here was found on his neck."

The character with no shoes and tattered pants came with instructions to put some sort of neck piece on him, reports CBS Sacramento.

"You cannot have this specific accessory and call it anything else," Lockett said. "The fact that you can Google it, look it up, say what it is -- it's a slave collar."

Ida says she is sure her son was playing with a toy slave. The ship itself comes with what she calls a dungeon.

"It's definitely racist," she said. "It told my son to put a slave cuff around the black character's neck, and then to play with the toy."

CBS Sacramento reached out to the toy's maker, Playmobil, and the retailer who sold it, but neither have responded to requests for comment.

"This is deplorable. This cannot be accepted," he said. "And it needs to be pulled off the shelf."