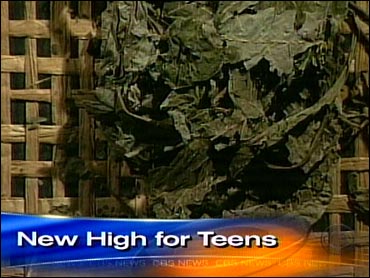 Of all the crazy videos posted on YouTube, those depicting teenagers smoking an herb called salvia divinorum, then seemingly losing control, are among the most disturbing.

Salvia is legal in most of the country and it seems to be a fad among teenagers, said Dr. Bryan Roth who studies the herb.

It may look like the kids in the YouTube videos are having fun, but Kathy Chidester is convinced salvia killed her only child. Sixteen-year-old Brett Chidester was a whiz on a skateboard, a straight-A student and the joy of his divorced parents lives. Then he started smoking salvia.

"He got withdrawn within the last couple of months," said his father, Denis Chidester. "And he wouldn't open up like he used to. I figured it was a teenage thing. Boys don't like to talk to their dads."

But Brett's mom did a little digging on his computer and found out he was buying salvia online and smoking it.

"He'd say, 'Mom, it's legal. There's nothing wrong with it. If it was bad it wouldn't be legal,' " Kathy Chidester said.

Brett's mood grew darker and on a cold Monday in January, at his dad's Delaware home, Brett Chidester did what his parents believe salvia drove him to do: he killed himself.

"My life as I knew was over," Kathy Chidester said. "It'll never be the same. He was our light and our life and it's gone."

While Brett's is the only known case that could link salvia to suicide, some fear there could be others out there. The journal Addiction says salvia is becoming increasingly popular among teenagers, which alarmed Delaware Sen. Karen Peterson.

"I thought this is not something that I would want people using driving around the streets of Delaware," she said.

Three months after Brett committed suicide, Delaware passed a law that banned salvia for recreational use. Delaware is one of five states to classify salvia as a controlled substance.

Since salvia is still legal in the rest of the country, you can order it off the Internet or buy it in a smoke shop. Smith went undercover in New York, where it's legal, to see how easy it is to get.

In less than an hour, she was able to buy it in leaf form, powder, and even an extract that comes in flavors. But don't let it fool you. Experts say this is the most potent naturally occurring hallucinogen.

"It should be regulated," Roth said. "It is more difficult for people to buy alcohol or cigarettes than this extremely potent hallucinogen."

The DEA is considering classifying salvia as a schedule one drug, which means it has no medicinal use and a high abuse potential like heroin or LSD. That would make it illegal to buy, sell or use in all 50 states.

"Because people are buying this through the mail it certainly would be a lot more effective if the federal government dealt with it," Peterson said. "And then we wouldn't have to deal with it state by state."

Still, salvia experts are conflicted. While most agree that it should be regulated, they also say it could help treat diseases like Alzheimer's and HIV and worry that a strict DEA ban will stop that promising research.

But Kathy Chidester is convinced that without a federal ban other kids will suffer the same fate as her son.

"I want the DEA to take action and I want it to be outlawed and regulated across the United States," she said. "I don't want anyone else to ever have this happen. I mean, I wouldn't wish this on our worst enemy."