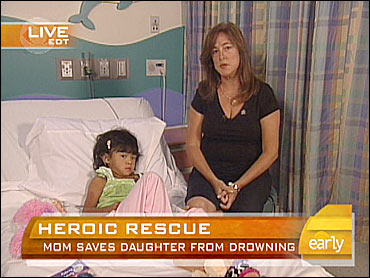 A mother suddenly found herself in a race against time to save her drowning daughter -- and she succeeded.

Patsy Schmidt-Cozier's daughter, Rose Cozier, 4, was under water in a backyard pool, her arm stuck in the suction drain. Patsy yanked and yanked, and eventually got Rose out -- then performed CPR. She even called 911 herself!

"Rose is doing very well," Patsy told The Early Show co-anchor Julie Chen from Miami Children's Hospital Friday, little Rose in bed at her side. " ... She's in high spirits. And thank God she's here with us, after such a terrible moment."

Patsy says it all happened during a pool party. She was helping another child in the water when she realized Rose "was -- her body was against the wall of the pool., and she was totally under the water, and kind of looking at me as if asking for help.

"Right away, I noticed the distressed face. And I went to pull her out. And when I pulled her out, I couldn't, because her whole arm was inside the vacuum hole, the suction hole. I did it two times. During that time, she was looking at me, basically trying to say, 'Mommy, rescue me. Because, you know, I'm drowning.'

"At that time, I noticed there was nothing. There was nothing I could do. Because I couldn't take her out. I jumped in and with all my strength -- I even said to myself, even if the arm has to stay in the hole, I need to pull her out. She was turning purple. Her eyes were flipping backwards. It was bad. So I pulled her out and took her out," using all her might.

Then, Patsy continued, she started administering CPR, and "heard a noise coming from her stomach like she was going to throw up. Let me tell you, that was the most beautiful noise I've ever heard in my life, her trying to throw up. And then, I did some compressions on her chest. And she threw up for the second time.

Meanwhile, I'm screaming, 'Somebody call 911!' But everybody was panicking. Nobody could call 911. So I just pulled my daughter on her side and I told a grownup next to her to just tap her back. And I went inside the house and called 911. And I couldn't see her. I wanted to call 911, because I'm sure they're better on these things than me."

Patsy says the doctors tell her Rose "is going to be fine. She suffered injuries on her arm because of the fact that the whole thing -- the whole arm was inside the suction. So she had bruises on her arm. She's badly bruised. But she's doing well. Thank God she's alive and well!

What was going through her mind when you was doing CPR?

"I kept thinking that I brought her all the way from China to give her a better life," Patsy told CBS News through tears, "and I couldn't believe that this was happening to her. She was abandoned in China, and all I wanted was the best for her (and I adopted her), and to see her like that was very devastating. I couldn't believe my daughter was dying. I never thought this would happen to her."

Luckily, Patsy says, she learned CPR nine years ago because her first child was autistic "and I wanted to make sure I knew everything to protect him."

Chen then interviewed an expert in preventing accidental injuries to kids, who offered several realistic suggestions for preventing pool drain-related injuries and deaths.