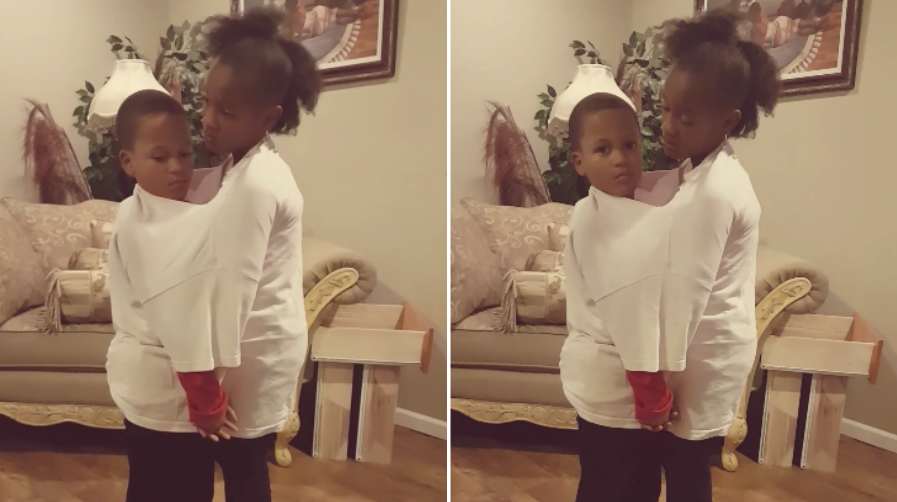 Whenever 10-year-old Dominique and 8-year-old Tyler start to argue or fight, their mother turns to them and asks one simple — yet alarming — question, “Do you need me to get the shirt?”

The siblings immediately pause, hoping to prove to their mom they can get along without the large piece of clothing, which she calls the “I love you” shirt.

Alexis Tillman, a mother of four from Melville, Illinois, said she’s been using the T-shirt punishment for a little over a year now.

“I want them to get along, to stick together,” Tillman told CBS News. “So that’s what I’ll keep trying to teach them. Whatever it is that you’re arguing or bickering about it’s silly, let it go.”

And it seems to work.

The children both have to wear the shirt, face each other, lock fingers and hug each other. Sometimes, Tillman even makes them slow dance to a song or two.

“It depends on how bad the situation is that particular day. If it’s something really dramatic I put on two or three songs,” she said.

She recently posted a Facebook video of the pair dancing to “I’m Lost Without You” by BeBe and Cece Winans, an American gospel music brother and sister duo, after the siblings fought over an iPad. It received nearly 5 million views since it was posted in late March.

“They sing gospel songs together. They are very, very close,” Tillman said. “That’s why I picked that song. I wanted them to hear the words they are saying. I said, ‘You’re brother and sister — you need each other.’”

Luckily, Tillman says, she hasn’t had to use the punishment on her other two kids, Meri, 16, and Kaylin, 12. But Dominique and Tyler will probably need it for a few more years.

“I think the shirt is better because it’s a little annoying. It beats yelling at them or spanking them,” Tillman said. “I just think you don’t necessarily have to do that something [like that]. The ‘love shirt’ is simple. It’s a different impact.”