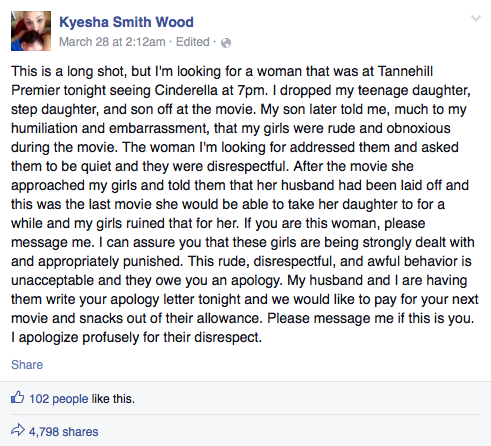 When Kyesha Smith Wood heard her kids were disrespectful at a movie theater over the weekend, she did what most parents would do -- she punished them.

But unlike some parents, she didn't stop there.

The Alabama mother took things a step further by going on a mission to find and apologize to a woman her teenage daughter and stepdaughter disrupted by writing a Facebook post that eventually went viral.

Smith Wood explained in the post that she dropped her daughter, stepdaughter and son off at a movie theater Friday night. Afterward, her son told her that the girls were "rude and obnoxious" during the movie.

A woman addressed the teenage girls and asked them to be quiet. After the movie, she approached them and explained to them that her husband had been laid off.

"This was the last movie she would be able to take her daughter to for awhile and my girls ruined that for her," Smith Wood wrote on Facebook.

The teenagers were punished, but they also "owe you an apology," Smith Wood continued.

"My husband and I are having them write your apology letter tonight and we would like to pay for your next movie and snacks out of their allowance," Smith Wood wrote. "Please message me if this is you."

The Facebook post has been shared nearly 5,000 times since it was posted early Saturday morning and has received several comments praising the mom's parenting.

"Parenting. You're doing it right," one user commented.

"If our youth had more good parenting like this, then the world would be a better place," another commented.

On Sunday, the Jefferson County Sheriff's Office announced that the mother with "great parenting skills" found the person she was looking for.

"They have been in touch with one another and all is being set right," the department shared on its Facebook page. "Nothing but grace and class on the part of both these ladies."

Boyd thanked Smith Wood for teaching the girls a lesson.

"The way you handled the situation and the lessons you are teaching your girls is wonderful," Boyd commented on Smith Wood's Facebook post. "This is something we will never forget!!!! I feel like we will always be connected!!!!"

After thanking people for praising her parenting, Smith Wood said she's not a hero.

"As long as we are teachable, willing to recognize our faults, and as willing to learn from our mistakes as our children, we will be ok," she posted on Facebook Tuesday.