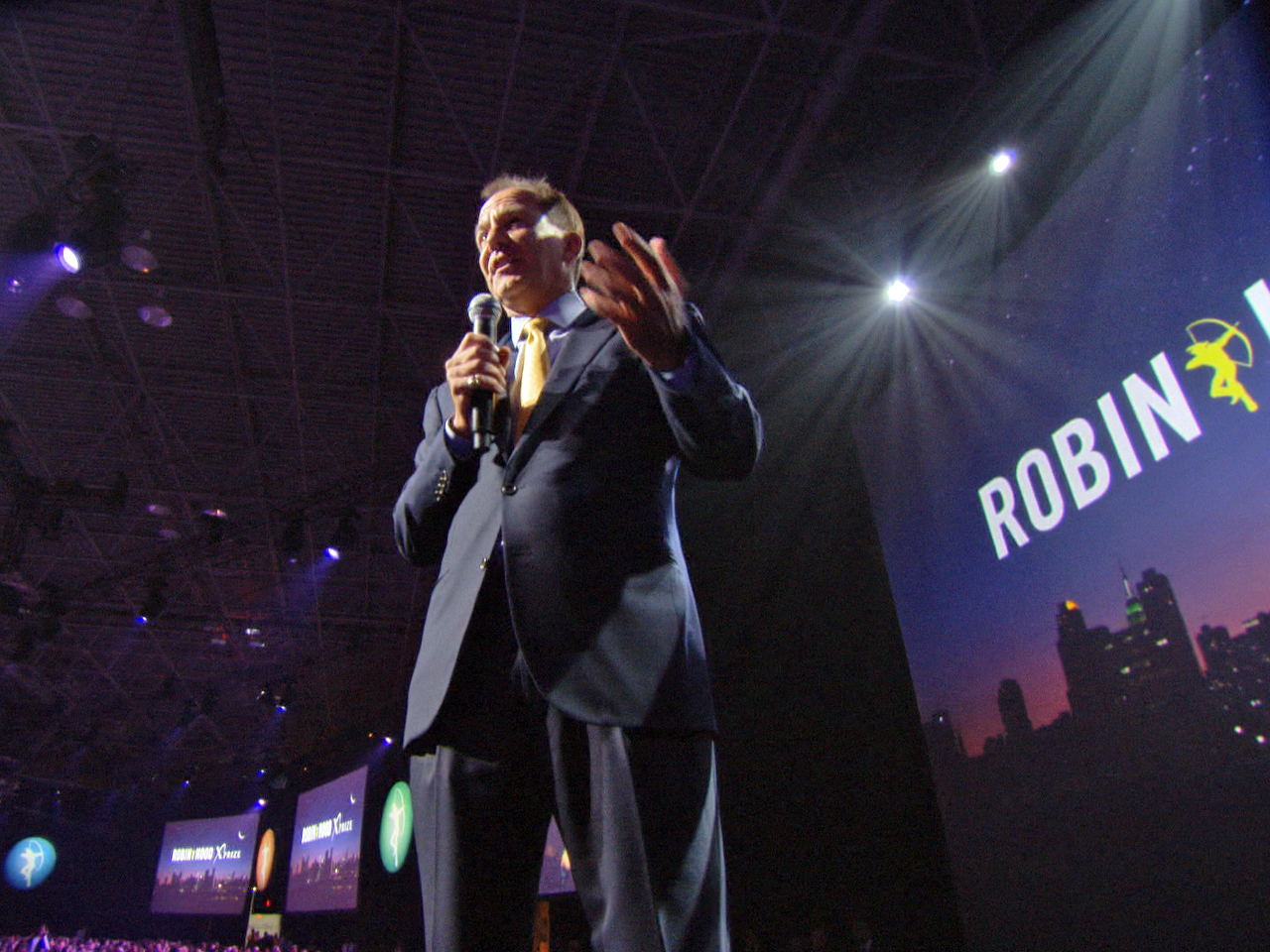 The following is a script from "Robin Hood" which aired on May 5, 2013. Scott Pelley is the correspondent. Henry Schuster, producer.

Ask Wall Street bankers the net worth of Paul Tudor Jones, and they'll tell you, $3.6 billion. He's one of those hedge fund managers. But ask a homeless child or a struggling family and they'll tell you that a spreadsheet is no way to measure a man.

Paul Tudor Jones wonders that if billionaires, like him, are such geniuses, then why do nearly two million people live in poverty in New York City alone? In 1988, he started a charity called the Robin Hood Foundation. Twenty five years later, Robin Hood has given away more than one and a quarter billion dollars. As we first showed you in April, it's become the city's largest private backer of charter schools, job training and food programs. Tudor Jones has learned hard lessons -- for a latter day Robin Hood, it turns out giving to the poor is harder than he thought. And as for taking from the rich? Well, he finds it's best to distract them.

For more information on the Robin Hood Foundation, click here

Arena concert. But it's a private party for the super rich. The Robin Hood Foundation's annual fundraiser seats 4,000 in Manhattan's convention center.

[Seth Myers: It's amazing who is here tonight, give yourselves a round of applause. It's like the one percent has its own one percent.]

They laugh, because it's true. Billionaires, stars and athletes are here for the 22nd year to lay credit cards at the feet of Paul Tudor Jones.

[Paul Tudor Jones: Brothers and sisters of Robin Hood, new ideas, different ideas, crazy ideas, those are the ones that change the world and boy, does the world outside these walls need changing.]

Scott Pelley: What do you see when you look around the city?

Paul Tudor Jones: I see people in pain, people in need, people at times without hope, looking for something that will give them some compelling future. I see too many people in homeless shelters, on food stamps. I think a lot of us don't like to focus on it, but it's a significant part of this country that needs to be addressed.

There was a time he was focused on himself. This is Paul Tudor Jones in the 1980s, age 32, in a documentary about Wall Street.

Paul Tudor Jones: My mother told me I was gonna be a preacher. I always wanted to be a millionaire or a movie director.

Scott Pelley: So you chose millionaire?

Paul Tudor Jones: I don't know if I chose millionaire, I ultimately got to that point, yes.

That point and far beyond. But his mother had seen something of a preacher and months after that documentary, Tudor Jones caught a glimpse of it too. It was 1986, one Sunday night.

Harry Reasoner met Gene Lang , a millionaire who guaranteed college tuition for every kid in one Harlem class.

[Harry Reasoner: Are they good kids? Do you like them?

Gene Lang: Oh I love them. I look at them now, all of them, as an extension of my family.]

Paul Tudor Jones: Well, the second that program finished, I picked up the phone. I called Gene Lang. And I said I wanna do what you're doing.

Scott Pelley: You know, I'm curious what it was about that program and about where you were in your life that ignited that spark in that moment?

Paul Tudor Jones: There was probably a hole in my soul. And I didn't really know it at the time. And all of a sudden, here was this man that showed the joy of giving. So the lesson that I learned was that there was a whole new journey in my life that was ahead of me that I had not yet even realized was there.

So he adopted a school too, confident that if he showered it with money, the students would thrive.

Paul Tudor Jones: I was throwing everything in the world I could at it. I was taking them on trips every summer and providing after-school services. We put so much time, energy, and love into them.

But he failed. After five years, the grades in his school were no better than average.

Paul Tudor Jones: I felt like I had failed a great deal of those kids. But failure, a lot of times, is the fire that forges the steel for success, right? There are going to be stops, there are gonna be failures. There are gonna be setbacks. But you grow from those and you get better and it becomes transformative.

Turned out a preacher's compassion needed a little Wall Street ruthlessness. So Tudor Jones and his friends set up Robin Hood to invest in poverty programs in the same hardnosed way they invested in businesses. Their offices are filled with analysts and accountants who help the best ideas develop and measure the results without mercy.

Mary Alice Hannan: My relationship with Robin Hood has evolved over the years like mother-daughter, you know, friend-and-foe--

Sister Mary Alice Hannan's soup kitchen in the Bronx had lived "hand to mouth" for almost a decade and then came Robin Hood with an offer to invest and expand.

Mary Alice Hannan: Friend and foe. I mean this in a loving way, but I loved and hated them in 30 seconds. And I'm sure they felt the same way about me.

Love was nice but Robin Hood wanted data. Who was being served, how many, what was the cost? Did the data support expansion? And where was the nun's business plan?

Scott Pelley: You're just trying to get through today?

Mary Alice Hannan: Today, right. So the first thing was a five-year strategic plan and I went, "Ugh, alright." And it was a long, tedious experience. And it was wonderful and we came up with all these spectacular goals and that was really, really good. Yay, yay! It was the follow up of the goals that became the challenge.

Robin Hood invested 5 million in the kitchen's expansion goals and now they're serving more than twice as many as before. But when programs don't perform, Robin Hood takes the money back.

Scott Pelley: You do that to 5 percent to 10 percent of your projects every year?

Paul Tudor Jones: Yes, because we're always trying to find new things, and by definition, you're gonna fail at times. It's what you have to do to be at the forefront of actually finding a way to kick poverty's ass.

Recently Robin Hood's board of directors met at the soup kitchen. The personal net worth of the board adds up to $25 billion. Robin Hood takes all of its expenses from the board members, so 100 percent of donations are given to the poor. Just like its namesake.

Paul Tudor Jones: If you said to me what part of our success is due to our name, I'd say it's a big part of it 'cause it's a great name, right? It says everything.

Scott Pelley: Is that what happens at that gala we went to? Taking from the rich? Well, you put the arm on them.

Paul Tudor Jones: But many years from now, when you look back on your life and you are at your end, would you trade those fleeting luxuries for one chance, just one chance to return to this night. And give a hundred thousand people a chance to grab their dream.

Scott Pelley: You were shaking people by their ankles.

Paul Tudor Jones: You cannot have significance in this life if it's all about you. You get your significance, you find your joy in life through service and sacrifice. It's pure and simple.

Big charity galas often bring in $3 million to $5 million. Tudor Jones took in more than $57 million this night. The money goes to about 500 projects. Robin Hood spent 130 million last year, with a heavy emphasis on schools.

Scott Pelley: You are graduating your first class.

Jabali Sawicki is headmaster of what was a crack house. An old school in Brooklyn had been abandoned as the neighborhood collapsed.

Jabali Sawicki: It's dilapidated. It's falling down. People walk by and they put graffiti on it. That's exactly how people viewed African American boys at the time.

Sawicki was hired by Tudor Jones. And they opened the Excellence Boys Charter School, grades K through 8. Tudor Jones believes that his experiment with that middle school in the 1980s failed because he caught the kids too late.

Now Robin Hood is supporting younger kids in 80 schools. It spent $35 million turning the crack house into a crack program. They call students here "scholars." The day is long and they don't waste a minute.

Not even when they're passing from one class to the next.

New York City's Department of Education tells us the Excellence Boys School is significantly better than average in math and science, and slightly better in English.

The boys have reached the city's top 20 percent even though some of them start the day in homeless shelters and others in troubled homes.

Scott Pelley: There was a shooting near the school recently. How did the boys handle that?

Jabali Sawicki: A tragic event. The father of one of our scholars was murdered one block away. And to make matters even worse, two of our other scholars in the school witnessed the entire thing.

Scott Pelley: What did you tell the boys?

Jabali Sawicki: That in 15 to 20 years, they're gonna be the men that are out on the street, navigating that world. Excellence symbolizes the greatest mechanism for us to create a world where no one ever has to see their father buried, or no one ever has to walk up to the casket, look into that father's closed eyes, and ask mommy, is he sleeping? And we told them, "That's why we do this."

This is the graduation of the first class to go from kindergarten to eighth grade. Some of them are headed to top prep schools.

Scott Pelley: When you're standing up there, looking across all those faces, what are you going to see?

After that failure with the older kids, Tudor Jones is focused now on the starting line.

After 25 years of Robin Hood, countless lives have been changed but the city's poverty rate doesn't. It's about 20 percent year in and year out. If Robin Hood is a hedge fund for humanity, then a Wall Street trader would say that Tudor Jones is buying on the "futures" market -- a bet that investing in young children and families will pay big dividends in the next generation.

Scott Pelley: And more to do.

Paul Tudor Jones: And more to do.