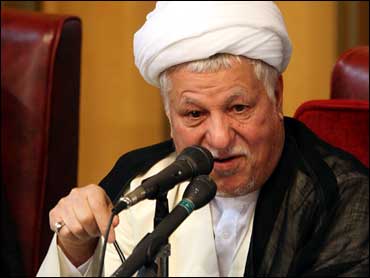 Rafsanjani received 41 votes to become head of the Assembly of Experts, a body of 86 senior clerics charged with monitoring Supreme Leader Ayatollah Ali Khamenei and choosing his successor.

Rafsanjani succeeded Ayatollah Ali Meshkini who died after a long illness in July.

The election of Rafsanjani is seen as yet another defeat to hard-liners and a victory to moderate conservatives within Iran's ruling Islamic establishment.

While extremists such as Jannati are among the proponents of the theory that the legitimacy of Iran's clerics to rule the country is derived from God, but Rafsanjani is believed to side with pro-democracy reformers who believe the government's authority is derived from popular elections.

The Experts Assembly is seen as the pillar of the regime because of its lofty duties: monitoring the all-powerful supreme leader and picking a successor after his death.

In December, Rafsanjani, who is considered an opponent to Ahmadinejad and lost to him the 2005 presidential runoff, won the largest number of votes in his re-election for a seat in the Assembly of Experts. He defeated Jannati and Ayatollah Mohammad Taqi Mesbah Yazdi, widely seen as Ahmadinejad's spiritual mentor.

"Rafsanjani's election is yet another no to the fossilized extremists such as Jannati and Mesbah Yazdi. Given differences between Rafsanjani and Khamenei, the election of Rafsanjani is seen as a challenge to the supreme leader," said political analyst Hamid Reza Shokouhi.

The Assembly has not published a single public report about its monitoring of Iran's supreme leader in the past three decades. Rafsanjani had hinted in the past that the assembly has to publish reports to respect the public and inform the nation of its activities.

"Now, the assembly is in a better shape to contain Khamenei," Shokouhi said.

"Recently, Rafsanjani talked about the assembly increasing his monitoring of Khamenei. The outside world must know that Rafsanjani's election today is an important development in Iran," he said.

The body's real clout only kicks in after the supreme leader is gone - a sort of Iranian version of the Vatican's College of Cardinals when they gather to pick a new pope. The assembly has done that only once since the 1979 Islamic Revolution. In 1989, it picked Khamenei to succeed his late mentor, the Islamic Revolution patriarch Ayatollah Ruhollah Khomeini.