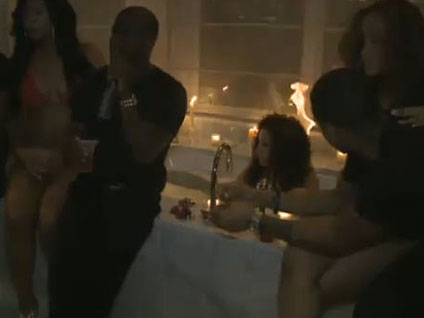 NEW YORK (CBS) A model's hair caught fire at a party thrown by Sean "Diddy" Combs, and the entire incident was caught on video.

The woman was lounging in a bathtub at the party, which was celebrating the rapper's new album "Last Train to Paris," when her hair was set alight by a nearby candle.

[Scroll down to watch the video.]

The fire was quickly extinguished after she doused her hair in the water. The video was broadcast on Diddy's Ustream channel.

The rapper went on "Jimmy Kimmel Live" on Thursday to discuss the incident, explaining that no one was hurt and the model was a good sport about what happened.

"I wanna say that she was a great sport about it, nobody got hurt...and she got back in the tub! It's the safest place, if you think about it," he said.