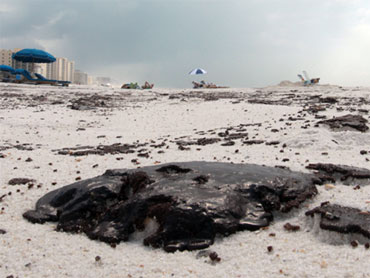 A new computer model shows oil from the massive Gulf of Mexico spill has as high as an 80 percent chance of reaching the Florida Keys and Miami.

The National Oceanic and Atmospheric Administration released the forecast Friday. It shows a 61 to 80 percent chance of sheen, tar balls or other oil remnants coming within 20 miles of Florida's eastern coast, from the Keys north to the Fort Lauderdale area, by on Aug. 18.

Outside those areas and the Florida Panhandle, which has already seen beaches littered with tar balls, other areas show a low probability of oil. The state's western coast has a 20 percent chance or lower of seeing oil, and parts of southwest Florida have less than a 1 percent chance.

In other news, BP and the Obama administration face mounting complaints that they are ignoring foreign offers of equipment and making little use of the fishing boats and volunteers available to help clean up what may now be the biggest spill ever in the Gulf of Mexico.

The Coast Guard said there have been 107 offers of help from 44 nations, ranging from technical advice to skimmer boats and booms. But many of those offers are weeks old, and only a small number have been accepted, with the vast majority still under review, according to a list kept by the State Department.

And in recent days and weeks, for reasons BP has never explained, many fishing boats hired for the cleanup have done a lot of waiting around.

A report prepared by investigators with the House Committee on Oversight and Government Reform for Rep. Darrell Issa, R-Calif., detailed one case in which the Dutch government offered April 30 to provide four oil skimmers that collectively could process more than 6 million gallons of oily water a day. It took seven weeks for the U.S. to approve the offer.

"That is a myth," he declared, "that has been debunked literally hundreds of times."

He said 24 foreign vessels were operating in the Gulf before this week. He did not specifically address the Dutch vessels.

The help is needed. Based on some government estimates, more than 140 million gallons of crude have now spewed from the bottom of the sea since the April 20 explosion that killed 11 workers on the Deepwater Horizon oil platform, eclipsing the 1979-80 disaster off Mexico that had long stood as the worst in the Gulf.

One possible option for the government is a huge new piece of equipment: the world's largest oil-skimming vessel, which arrived Wednesday.

Officials hope the ship can scoop up to 21 million gallons of oil-fouled water a day. Dubbed the "A Whale," the Taiwanese-flagged former tanker spans the length of 3½ football fields and is 10 stories high.

It just emerged from an extensive retrofitting to prepare it specifically for the Gulf, but it's still waiting for the Environmental Protection Agency and Coast Guard to sign off on it's use.

"It is absolutely gigantic. It's unbelievable," said Ed Overton, a Louisiana State University environmental studies professor who consults for the federal government on oil spills. He saw the ship last week in Norfolk, Va.

The vessel looks like a typical tanker, but it takes in contaminated water through 12 vents on either side of the bow. The oil is then supposed to be separated from the water and transferred to another vessel. The water is channeled back into the sea.

But the ship's never been tested, and many questions remain about how it will operate. For instance, the seawater retains trace amounts of oil, even after getting filtered, requiring the EPA to sign off on allowing the treated water back into the Gulf.

"This is a no-brainer," Overton said. "You're bringing in really dirty, oily water and you're putting back much cleaner water."

The Coast Guard will have the final say in whether the vessel can operate in the Gulf. The owner, shipping firm TMT Group, will have to come to separate terms with BP, which is paying for the cleanup.

"I don't know whether it's going to work or not, but it certainly needs to be given the opportunity," Overton said.

Meanwhile, more than 2,000 smaller boats have signed up for oil-spill duty under BP's Vessel of Opportunity program. The company pays boat captains and their crews a flat fee based on the size of the vessel, ranging from $1,200 to $3,000 a day, plus a $200 fee for each crew member who works an eight-hour day.

Rocky Ditcharo, a shrimp dock owner in Buras, La., said many fishermen hired by BP have told him that they often park their boats on the shore while they wait for word on where to go.

"They just wait because there's no direction," Ditcharo said. He said he believes BP has hired many boat captains "to show numbers."

"But they're really not doing anything," he added. He also said he suspects the company is hiring out-of-work fishermen to placate them with paychecks.

Chris Mehlig, a fisherman from Louisiana's St. Bernard Parish, said he is getting eight days of work a month, laying down containment boom, running supplies to other boats or simply being on call dockside in case he is needed.

"I wish I had more days than that, but that's the way things are," he said.

Billy Nungesser, president of Louisiana's hard-hit Plaquemines Parish, said BP and the Coast Guard provided a map of the exact locations of 140 skimmers that were supposedly cleaning up the oil. But he said that after he repeatedly asked to be flown over the area so he could see them at work, officials told him only 31 skimmers were on the job.

"I'm trying to work with these guys," he said. "But everything they're giving me is a wish list, not what's actually out there."

Newly retired Coast Guard Adm. Thad Allen, the government's point man for the response effort, bristled at some of the accusations in Issa's report.

"I think we've been pretty transparent throughout this," Allen said at the White House. He disputed any suggestion that there aren't enough skimmers being put on the water, saying the spill area is so big that there are bound to be areas with no vessels.

The Coast Guard said there are roughly 550 skimmers working in the Gulf, with 250 or so in Louisiana waters, 136 in Florida, 87 in Alabama and 76 in Mississippi, although stormy weather in recent days has kept the many of the vessels from working.

The frustration extends to the volunteers who have offered to clean beaches and wetlands. More than 20,000 volunteers have signed up to help in Florida, Alabama and Mississippi, yet fewer than one in six has received an assignment or the training required to take part in some chores, according to BP.

The executive director of the Alabama Coastal Foundation, Bethany Kraft, said many people who volunteered are frustrated and angry that no one has called on them for help.

"You see this unfolding before your eyes and you have this sense that you can't do anything," she said. "To watch this happen in our backyard and not be able to help is hard."

By either estimate, the disaster would eclipse the Ixtoc disaster in the Gulf two decades ago and rank as the biggest offshore oil spill during peacetime. The biggest spill in history happened in 1991 during the Persian Gulf War, when Iraqi forces opened valves at a terminal and dumped about 336 million gallons of oil.

The total in the Gulf disaster is significant because BP is likely to be fined per gallon spilled. Also, scientists say an accurate figure is needed to calculate how much oil may be hidden below the surface, doing damage to the deep-sea environment.

"It's a mind-boggling number any way you cut it," said Ed Overton, a Louisiana State University environmental studies professor. "It'll be well beyond Ixtoc by the time it's finished."