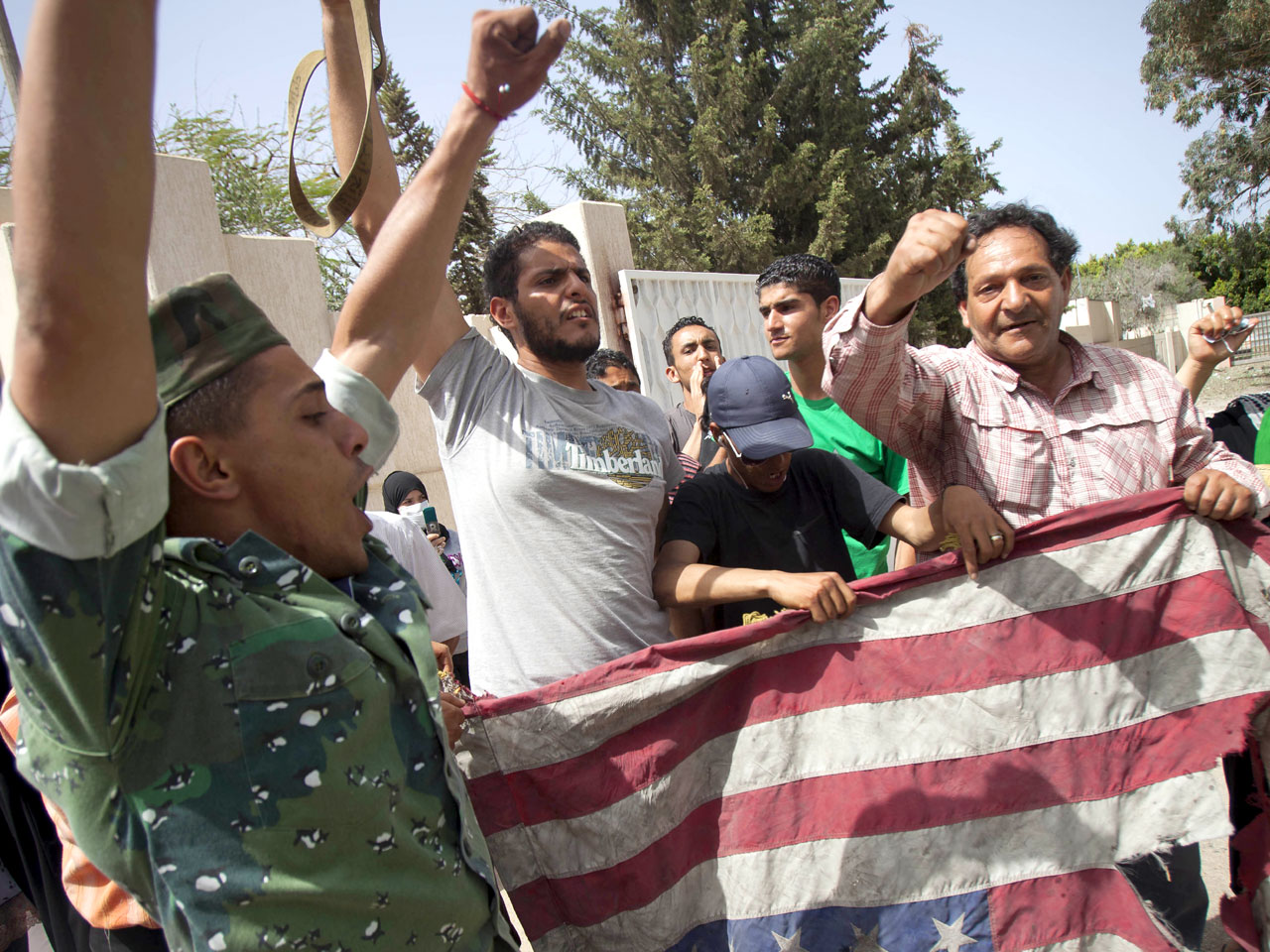 As a result of the mob attacks, the U.N. has decided to withdrawal all of its international staff from the Libyan capital, and the British government expelled the Libyan ambassador, BBC reports.

Russia said the Western alliance exceeded its U.N. mandate of protecting Libyan civilians with the strike.

The vandalized embassies were empty and nobody was reported injured, but the attacks heightened tensions between the Libyan regime and Western powers, prompting the United Nations to pull its international staff out of the capital.

The bombing did not slow the attacks by Qaddafi's forces on rebel strongholds in the western part of Libya that has remained largely under the control of the regime. The rebel port of Misrata, which has been besieged by Qaddafi's troops for two months, came under heavy shelling Sunday and at least 12 people were killed, a medic said.

Qaddafi has repeatedly called for a cease-fire, most recently on Saturday, but has not halted his assault on Misrata, a city of 300,000 where hundreds have been killed since the rebellion against Libya's ruler erupted in mid-February.

The rebels, who control most of eastern Libya, have been unable to gain an advantage on the battlefield despite weeks of NATO airstrikes. Alliance officials and allied leaders emphatically denied they were hunting Qaddafi to break the stalemate between the better trained government forces and the lightly armed rebels.

Canadian Lt. Gen. Charles Bouchard, who commands NATO's operation in Libya, said that "we do not target individuals." However, the leaders of the U.S., Britain and France have said Qaddafi must go, prompting warnings by U.N. Security Council members Russia, China and Brazil against NATO attempts to change the regime.

In some of its strongest language, the Russian Foreign Ministry on Sunday accused NATO of a "disproportionate use of force" and cast doubt on NATO's assertion that it is not targeting Qaddafi or members of his family. Russia called for an immediate cease-fire.

NATO warplanes have shifted their focus in the past two weeks from support for rebels on the front lines to attacking the regime's communications centers. Saturday's strike reduced most of the Qaddafi family compound, which takes up an entire block in the residential Garghour neighborhood, to rubble.

Dr. Gerard Le Clouerec, a French orthopedic surgeon who runs a private clinic in Tripoli, inspected the bodies of an adult and two infants at Tripoli's Green Hospital on Sunday.

He told reporters that the adult's face was intact and that "in relation to a photo we have seen most probably was the son of Qaddafi." He said the adult had a thin mustache and a full beard.

The two children had been badly disfigured, the doctor said.

The complex targeted Saturday, hidden from view by blast walls and tall trees, contained three one-story buildings and a large yard with lawns, geranium flower beds, a woodshed, a swing and a table soccer game. A dead deer and a twisted bathtub lay on the debris-strewn grass.

A kitchen clock, knocked from the wall, had stopped a 8:08 and 45 seconds, the time of the explosion. Cooking pots with food, including stuffed peppers, noodles and a stew, had been left on the stove, covered with aluminum foil. Thick gray dust covered crates of onions and lemons in the pantry.

In one of the living rooms, a pile of video games, including FIFA 10, were scattered on a sofa. In what looked like a children's bedroom, half an apple and a glass container of Nutella chocolate spread stood on a night stand.

Foreign ambassadors, many from Africa, were given a tour by government spokesman Moussa Ibrahim, who told them that Africans must stick together against attempts at foreign meddling.

After news of the air strike spread in Tripoli, angry mobs trashed the embassies of Britain and Italy, a U.S. consular department and a U.N. office, said Libyan Deputy Foreign Minister Khaled Kaim.

The British Foreign Office said only burned shells remained of the British embassy buildings, including the ambassador's residence. The buildings had been "ransacked, vandalized and completely destroyed," a spokeswoman said.

Britain, which has taken a leading role in supporting the rebels, responded by ordering the expulsion of the Libyan ambassador, saying he must leave by Monday.

The Italian embassy in Tripoli was also burned, the Italian Foreign Ministry said, accusing the Qaddafi regime of failing to take measures to protect foreign missions. Italy withdrew its diplomats weeks ago and promised the attack on the embassy "will not weaken" its determination to continue with its partners in that mission.

A Libyan anti-Qaddafi activist who toured Tripoli said he saw scorch marks outside the building's windows and a green Libyan flag draped over the roof on one side. The windows in the guard shack at the entrance were smashed, said the activist, who spoke on condition of anonymity for fear of reprisals.

The U.S. evacuated its diplomatic staff at the start of the Libyan crisis, leaving Turkey to represent American interests in the country. In Washington, the State Department said it was aware of the reports of damage. "If true, we condemn these attacks in the strongest possible terms," the statement said, adding that by failing to protect the diplomatic missions, the regime "has once again breached its international responsibilities and obligations."

Vandals also entered empty U.N. offices in Tripoli and some vehicles were taken, according to Stephanie Bunker, spokeswoman for the U.N. Office for the Coordination of Humanitarian Affairs. Bunker said 12 foreign staffers left for neighboring Tunisia because of the unrest.

Kaim said the attacks were "regrettable" but that police had been outnumbered by angry crowds of hundreds of people. He said Libya would pay compensation for the damage.

Rebels celebrated the news of the airstrike that killed Qaddafi's son, although some questioned the veracity of the claim, saying the regime could be trying to discredit the international military campaign.

Qaddafi and his wife, Safiya, were in the family compound at the time of the attack but escaped unharmed, said Ibrahim, the government spokesman.

Seif al-Arab was the second-youngest of Qaddafi's seven sons and brother of the better known Seif al-Islam Qaddafi, who had been touted as a reformist before the uprising began. He also has a biological daughter, Aisha.

The younger Qaddafi had spent much of his time studying and partying in the southern German city of Munich in recent years and was not involved in Libyan power structures as were many of his siblings. Even photos of him are scarce. On Sunday, Ibrahim distributed a headshot showing him with a full black beard and wearing a black shirt.

Qaddafi, who has been in power for more than four decades, has fought fiercely to put down an uprising against his regime that began with protests inspired by a wave of Mideast unrest and escalated into an armed rebellion.

Misrata, Libya's third-largest city 125 miles (200 kilometers) southeast of Tripoli, has emerged as a key battleground as Qaddafi seeks to consolidate his hold in the west.

On Sunday, the Libyan government unleashed two volleys of rockets on Misrata's port, the rebel-held city's only lifeline. Heavy shelling also occurred elsewhere in the city throughout the day, killing 12 people and raising the two-day death toll to 23.

A first round of rockets hit the port early in the morning, while a Maltese aid ship that arrived the night before was unloading its cargo, said Ahmed al-Misrati, a truck driver who was in the port at the time.

Al-Misrati said the rockets hit the port area and the water near the boat, which pulled out to sea before it could finish unloading the aid.

A second, larger salvo of dozens of rockets struck the port area in the afternoon, causing fires that sent a huge plume of black smoke over the horizon.

One rocket hit a makeshift checkpoint outside the port, killing two people, medics said. Associated Press Television News footage showed smoke from a line of rocket strikes along the port road and a man screaming and holding his injured hand while fleeing from the checkpoint. Two bodies lay in the rubble.

Strikes also hit inside the port, destroying part of its main road and setting fire to shipping containers on the dock full of aid, said Ahmed al-Jamal, 27, who was slightly injured when the port restaurant was hit.

Fighting between rebel fighters and government forces continued in the southwestern neighborhood of al-Gheran.

Some 20 rebel fighters who said they were waiting for NATO airstrikes to advance collected in a house there, eating cookies, giving milk to local cats and leaning their rifles on the wall before lining up for Muslim prayers.

One fighter flipped through photos of his children on his cell phone when a rocket-propelled grenade hit near the house's open door, causing a boom that shook the walls. Shrapnel shattered the windshield and headlights of a parked ambulance, killing two fighters and injuring four others.