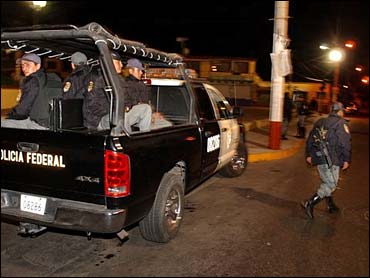 A crowd angry about recent child kidnappings cornered plainclothes federal agents taking photos of students at a school on Mexico City's outskirts and burned the officers alive, the latest example of mob justice in a country beset by corrupt police and high crime.

Officials said two agents were killed and one was hospitalized.

Federal police director Adm. Jose Luis Figueroa told local media that the three agents went to the southeastern Mexico City school in an unmarked car as part of an operation against drug dealing.

The killings, filmed and broadcast on local television stations, were carried out by a crowd of people who cheered, chanted and shouted obscenities as they kicked and beat the agents. The mob then dowsed two officers with gasoline and set them ablaze.

In the video, the agents, blood streaming down their faces, spoke into the cameras before the burning, saying they were federal anti-terrorism agents who had been sent to the area on official business.

The agents were held by the mob for several hours before they were killed. Figueroa said heavy traffic and residents who blocked authorities from moving kept police from responding in time.

The third agent, badly beaten, was rescued by police.

Images taken from a helicopter showed dozens of residents milling around the two burned, motionless bodies left in a street. Dozens of police in full riot gear moved in more than an hour later and dispersed the crowd.

The violence began in the early evening, when locals collared three men staking out a school in the San Juan Ixtlayopan neighborhood.

The area has been tense since two youngsters disappeared and were feared kidnapped from the school. Some in the crowd appeared to believe the agents were kidnappers.

When asked about complaints that authorities had failed to respond to demands to investigate the disappearances, Figueroa said a full schedule had prohibited federal authorities from concentrating on the case.

Mexicans, frustrated by government corruption and soaring crime rates, have often taken justice into their own hands.

Earlier this month in another town on the capital's outskirts, police rescued a 28-year-old man that residents were threatening to beat to death for allegedly trying to steal a guitar and tape deck from a community center.

Two years ago, a mob beat to death two of three youths who allegedly tried to rob a taxi driver in Mexico City.