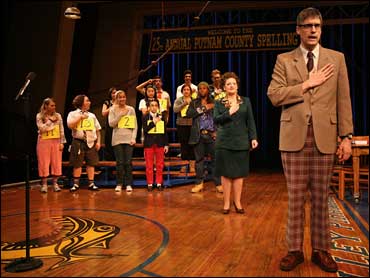 Watching Mo Rocca trade lines with audience members at "The 25th Annual Putnam County Spelling Bee," you wonder if a team of writers might be feeding him quips through a hidden earpiece.

The former "Daily Show" correspondent, who joined the comic musical's cast as Vice Principal Douglas Panch in mid-April, interacts with guests chosen from the audience to try and match spellers in the cast word for word.

But Rocca's quick wit is no trick, as he demonstrates before a recent interview. Asked to speak into a microphone for a sound check, he glances at his coffee cup, notes the beans are from Costa Rica, and dives into a list of facts about the country.

"Costa Rica not only has a lot of land devoted to conservation, it also has a social security system. Which is actually pretty remarkable. And a lot of Americans are retiring there."

"I've never been there," he says. "I've been to Guatemala, which has no distinction that I can think of right now. Except it has nice flora and fauna."

Rocca's ability to talk about anything, always in the same affable deadpan, has helped him transition easily from Comedy Central's "Daily Show" to CNN's "Larry King Live" and NBC's "The Tonight Show."

His comfort in front of a camera is obvious on the rare occasions he misspeaks. He'll finish his thought, pause, and deliver a more honed but nearly identical take for the benefit of the video editor.

The biggest surprise of "Putnam County" is that Rocca is as good on stage as he is on television. He joins a cast that pulls honest laughs from hilarious but realistic characters, playing an administrator undergoing Jungian analysis to avoid a repeat of an incident at the 20th annual bee.

Rocca's explanation of why he wanted to perform on Broadway includes stage references that suggest he's at least as knowledgeable about theater as he is about Central America — and maybe everything else.

"I've always been a big Broadway fan," he said. "Still at home in my bedroom in my mother's house you can find my cast albums catalogued, very carefully. I never ever mixed cast albums with soundtracks. In fact for Christmas, I think when I was nine, my parents gave me cassette tapes for 'Evita' and 'Oklahoma!' but I was annoyed because the 'Oklahoma!' was the soundtrack recording.

"And so I had to kindly ask my father to please return that. Because while I like Gordon MacRae, I prefer John Raitt (even though the original star of "Oklahoma!" was Alfred Drake)," he said. "And I felt guilty, because I like Shirley Jones. Who doesn't?"

His answer goes on for a minute and 40 seconds — in an answer that also includes references to Harry Potter books on tape and "the sort of sexual sort of communion you have with an audience" — before he reaches this conclusion:

"I mustered the courage after talking to my good friend Julia Roberts. Julia said, 'You've got to get back on the boards. That's where you belong.' And so I did it."

He adds: "This is Julia Roberts who works at All-State, in Baltimore. She's a friend of mine from high school."

The joke is one of the few Rocca makes over the half-hour interview. Mostly he keeps everyone in the room laughing by presenting everything he says as completely true, no matter how absurd it seems.

Rocca credits Simard with guiding him through the delicate task of sizing up audience members and finding jokes about them that are as hilarious to their targets as they are to those watching.

When one bespectacled, middle-aged woman was said to have recently appeared in a school production of "Mrs. Doubtfire," no one laughed harder than he did.

"It makes sense that I'm doing this show not only because I'm playing a teacher and I can be kind of pedantic in real life, but also because the role allows me to interact with the audience. I do a lot of live shows on campuses. I love game shows. I like bringing people on stage and asking them questions. So I'm kind of getting all of it in one package," he explains.

For all the open-ended banter with contestants, Rocca also carries the heavy responsibility of making sure none of the audience participants throw off the plot by outspelling the cast members.

The woman compared to Mrs. Doubtfire astonished Rocca by correctly spelling a whaling term of unknown origin, forcing him to call her back immediately. She came close to spelling his next word, an ophthalmological term.

"Believe me," he says. "I'm prepared. I don't anticipate a situation where we're going to be kept there for eight hours."

Could someone from the audience keep getting words correctly until they win?

"Theoretically, that could happen," he says. "At which point the earth will stop rotating and the show will become an endless interpretive dance."