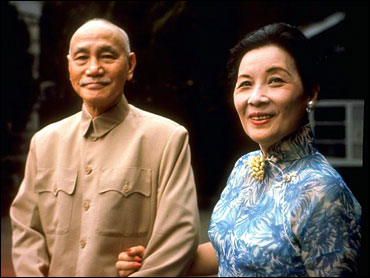 Madame Chiang Kai-shek, the widow of the Nationalist Chinese president who used her charm and fluent English to lobby Washington and become a driving force in Taiwan's Nationalist government, died Thursday in New York. She was 106.

She died in the evening at her apartment in Manhattan, according to Andrew Hsia, director-general of the Taipei Economic and Cultural Office in New York. Her niece, her niece's husband and a great-grandson were with her at the time.

The cause of death was not immediately available, Taiwan's Foreign Ministry spokesman Richard Shih said Friday.

Madame Chiang had been treated for cancer and other ailments. She lived in semi-seclusion after her husband's death in 1975, spending most of the time in her Manhattan apartment or at her family's 36-acre estate in Lattingtown, a Long Island suburb 35 miles east of New York City.

Madame Chiang and Chiang Kai-shek were one of the world's most famous couples. They married in 1926, a year after Mr. Chiang, also known as the Generalissimo, took over China's ruling Nationalist Party.

The Nationalists, or Kuomintang, overthrew China's last dynasty, the Qing, but their pledges to bring democracy to China and modernize the economy were frustrated by Japan's invasion during World War II and corruption within the government. After the war, the Nationalists lost a bloody civil war to Mao Tse-tung's Communist Party and retreated to Taiwan in 1949.

Though born in the East, Madame Chiang was thoroughly Western in thought and philosophy. Brought up in a Methodist family, she studied in America from the age of 10 to 19 and graduated with honors from Wellesley College in Massachusetts in 1917.

"The only thing Oriental about me is my face," she once said.

Her supporters said she was a powerful force for international friendship, understanding and good. But her detractors called her an arrogant dragon lady and propagandist for her husband's corrupt and incompetent government.

She was born Soong Mei-ling in 1897, on the southern Chinese island of Hainan. Her family's background could stand as a brief history of modern China as seen through revolution, efforts to unify and modernize and the split between the communist People's Republic of China and the Nationalists Republic of China.

Her father, Charles Soong, was educated as a Christian missionary at Vanderbilt University in Tennessee. Soong worked closely with Dr. Sun Yat-sen, leader of the Nationalist revolution that overthrew China's last emperor in 1911.

Education was important to Soong, and Madame Chiang and her two sisters were among the first Chinese women educated in the West at a time when foreign education was considered important only for sons.

A scholar at heart, Madame Chiang once said her idea of happiness would be a life of uninterrupted reading, studying and writing.

Madame Chiang met her husband, a disciple of Sun Yat-sen, around 1920 and married him Dec. 1, 1927. She later converted him to Methodism, but their marriage was often stormy, in part because of Chiang's infidelities.

Ching-ling, the second of six Soong children, married Sun Yat-sen, the father of modern China. She broke with the family's Nationalist ideology and sided with the Communists after her husband's death in 1925.

She eventually was appointed to a high-ranking position in the Communist government in Beijing, one roughly equivalent to vice president. Madame Sun died in 1981.

Madame Chiang was a working wife, taking on tasks ranging from interpreter and social worker to head of China's air force during World War II, an ironic twist of fate since she suffered greatly from air sickness.

Not one to be swayed by minor obstacles, Madame Chiang had an interesting perspective on her mission as Secretary General of the Chinese Commission on Aeronautical Affairs.

"Of all of the inventions that have helped to unify China, perhaps the airplane is the most outstanding," she once said. "Its ability to annihilate distance has been in direct proportion to its achievements in assisting to annihilate suspicion and misunderstanding."

The Generalissimo could not speak English and disliked dealing with foreigners, so his wife became his spokesman for the outside world, creating an image of an attractive, young couple trying to steer China out of war.

Madame Chiang was one of her husband's most prominent lobbyists in Washington and in 1943 became the first Chinese national ever to address a joint session of Congress.

Madame Chiang also wrote many books, including "This Is Our China," in 1940, and "The Sure Victory," in 1955, and received numerous honorary degrees, including from Boston University, the University of Michigan and Loyola University.

As the Generalissimo's health deteriorated, control of the Nationalist government eventually passed in 1972 to one of his two sons by a previous marriage, Chiang Ching-kuo. Madame Chiang and her husband had no children of their own, and she had long been on bad terms with Chiang Ching-kuo.

After her husband's death in 1975, Madame Chiang moved to the United States, staying in the stucco Long Island mansion where a large portrait of her late husband decked in full-military regalia hung in the living room. She moved out of the house in 1998 and spent most of her time in her Manhattan apartment.

When President Jimmy Carter announced in 1978 that the United States was breaking off diplomatic relations with Taiwan and establishing formal ties with the People's Republic of China, Madame Chiang remained in seclusion and did not comment.

The Nationalists eventually gave up the goal of "retaking the mainland," and the party's ranks began to fill with native Taiwanese as the influence of the mainlanders who retreated with Chiang Kai-shek faded away.

In March 2000, the party lost its five-decade control of Taiwan's presidency. Madame Chiang endorsed Nationalist candidate Lien Chan, but few voters paid serious attention to her and Lien was battered at the polls - an example of her fading influence.

Parents pray missing teens not among 53 found dead in tractor-trailer
Thanks for reading CBS NEWS.
Create your free account or log in
for more features.
View CBS News In
CBS News App Open
Chrome Safari Continue
Be the first to know
Get browser notifications for breaking news, live events, and exclusive reporting.