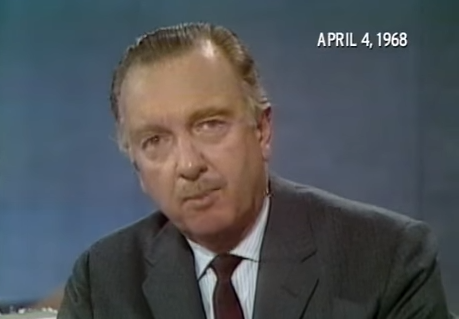 The Rev. Martin Luther King Jr. was standing on the balcony of the old Lorraine Motel in Memphis, Tennessee, when he was shot dead 50 years ago today. King, an iconic pastor who led non-violent protests against racial inequality in the civil rights movement, later died at a hospital. He was 39.

That night, Walter Cronkite -- then-anchor of the "CBS Evening News" -- went on air with a detailed report on the shooting and the nation's reaction to the tragedy.

"Dr. Martin Luther King, the apostle of non-violence in the civil rights movement, has been shot to death in Memphis, Tennessee," Cronkite said. "Police have issued an all-points bulletin for a well-dressed, young white man seen running from the scene. Officers also reportedly chased and fired on a radio-equipped car containing two white men."

"Dr. King was standing on the balcony of a second-floor hotel room tonight when, according to a companion, a shot was fired from across the street. In the friend's words, the bullet exploded in his face," Cronkite reported.

"Police, who had been keeping a close watch over the Nobel Peace Prize winner because of Memphis' turbulent racial situation, were on the scene almost immediately. They rushed the 39-year-old Negro leader to a hospital where he died of a bullet wound in the neck," Cronkite said. "Police said they found a high-powered hunting rifle about a block from the hotel, but it was not immediately identified as the murder weapon."

"Mayor Henry Loeb has reinstated the dusk-to-dawn curfew he imposed on the city last week, when a march led by Dr. King erupted in violence. Governor Buford Ellington has called out 4,000 national guardsmen, and police report that the murder has touched off sporadic acts of violence in a Negro section of the city."

The broadcast then cut to a clip of President Lyndon B. Johnson saying in a nationwide television address that America is saddened and shocked. "I ask every citizen to reject the blind violence that has struck Dr. King, who lived by non-violence," Johnson said.

Crokite reported that King had returned to Memphis the day before the shooting, "determined to prove that he could lead a peaceful mass march in support of striking sanitation workers, most of whom are Negroes."

The broadcast included a clip of King speaking the night before his assassination.

Cronkite reported that people in Harlem, New York, were shocked when they learned of King's death. "Men, women and children poured into the streets. They appeared dazed. Many were crying," he said.

According to Cronkite, one "young Negro said, 'Dr. King didn't really have to go back to Memphis. Maybe he wanted to prove something.'"