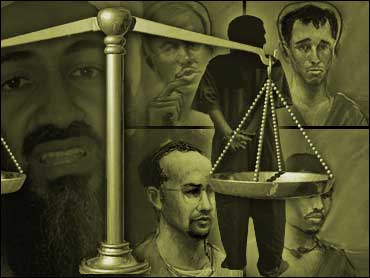 Two of four Arab immigrants were convicted Tuesday of conspiring to support Islamic extremists plotting attacks in the United States and the Middle East. A third was found guilty of a fraud charge, and a fourth was acquitted of all counts.

Abdel-Ilah Elmardoudi, 37, and Karim Koubriti, 24, were found guilty of conspiracy to provide material support or resources to terrorists and of conspiracy to engage in fraud and misuse of visas, permits and other documents.

Koubriti and Hannan were acquitted on two other fraud counts.

Farouk Ali-Haimoud, 22, was acquitted of all charges.

The case, which began with a raid on a Detroit apartment just six days after the Sept. 11 attacks, was seen as a test of the government's ability to prosecute terrorist "sleeper" cells.

"This isn't a clean, perfect result for prosecutors," says CBSNews.com Legal Analyst Andrew Cohen, "and the acquittals represent a rare defeat in court for the Justice Department since the terror attacks on America in 2001. But it's way too early to say it represents a turning of the tide in the legal war on terror. It's much more likely that these jurors simply weren't convinced that the feds have proven all elements against all defendants.

"The good news for prosecutors is that they were able once again to rely on this broad 'material support for terrorism' statute to get a few more convictions out of a jury," Cohen says. "The bad news for the feds is that jurors weren't willing to convict all four men on that serious charge and that means jurors didn't buy the government's case in full."

Prosecutors said the four men were working as part of a shadowy unidentified terrorist group. They said a videotape and sketches found in the raid showed potential targets were cased including Las Vegas and Disneyland, and military installations in Turkey and Jordan.

Defense attorneys said their clients were victims of overzealous federal agents who relied on the lies of an admitted con man to build a flimsy case that didn't add up to terrorism.

On Monday, U.S. District Judge Gerald Rosen called the jurors into his courtroom and told them to keep deliberating after they asked what to do if they couldn't reach a verdict on some or all of the charges.

Rosen told the jurors that it is typical to have difficulty reaching a verdict in a complex case such as this one.

Ali-Haimoud is Algerian and the others are from Morocco. Prosecutors said their plot was hatched before they arrived in the United States in the late 1990s and 2000.