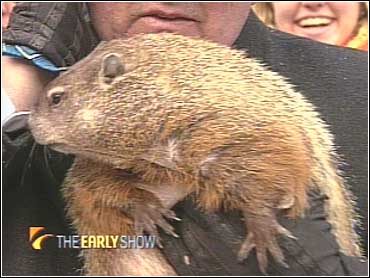 Spectators jumped and danced to keep warm in the 15-degree air as the groundhog's forecast - made despite overcast skies - was reported by his handlers.

The bitter cold - or a well-publicized ban on alcohol - may have deterred spectators who lacked Phil's lush fur. Organizers said they anticipated only 8,000 or 9,000 visitors, instead of the 15,000 who usually turn out.

"My toes are frostbitten, but it warms up if you start dancing," said Dan Pellam, who was making his first visit to Phil's lair.

The Groundhog Day tradition is rooted in a German superstition that if an animal casts a shadow on Feb. 2 - the Christian holiday of Candlemas - bad weather is coming.

In the 111 years since German farmers began the festival in Punxsutawney, the morning of Feb. 2 has evolved into an elaborate show of hoodwinkery.

In years past, members of the Inner Circle, the club that stages the annual midwinter festival, voted the night before whether or not Phil would see his shadow, rain or shine.

Skies had been cloudy starting Tuesday, with snow falling much of the time.

In the central Pennsylvania town of 6,700 people, Phil sees his shadow most years. Only 14 times has he predicted an early spring.

Phil's city cousin, New York's Staten Island Chuck, agreed with Phil's forecast. Chuck wandered out of his hut at the Staten Island Zoo and saw his shadow around 7:30 a.m., according to zoo spokeswoman Lorraine Austin.

That didn't discourage Georgia's prognosticating groundhog, General Beauregard Lee, who emerged from his home in Lilburn, to predict an early spring.

Wisconsin's most famous furry prognosticator agreed spring will be early.

Jimmy the groundhog in Sun Prairie did not see his shadow, which, according to legend, means an early spring. Jimmy's handlers say Sun Prairie groundhogs have been accurate nearly 80 percent of the time in the last ten years.

Groundhog Day was also observed in Canada. In Ontario, hundreds of people cheered as the new Wiarton Willie poked his head out and saw his shadow.

The albino groundhog was one of two brought in to replace the old Willie, who died last year.