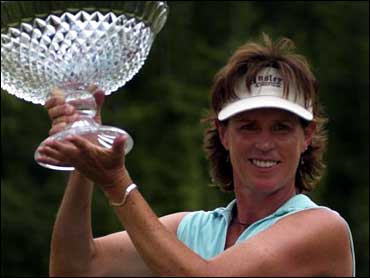 Rosie Jones walked off the green, signed a few autographs and pondered the reaction.

No boos. No taunts. No under-the-breath putdowns.

Nothing but encouragement. "Go get 'em, Rosie!" one fan shouted.

"Kind of," Jones conceded. "I didn't really think people would treat me bad, but I've been pleasantly surprised. I guess people have respect for my game."

Score one for changing attitudes.

Jones revealed in March that she was a lesbian, signed an endorsement deal with a company that caters to gay clientele and went right on with her life as an LPGA golfer.

Then again, the gay athlete has hardly become a fully vested member of the sporting world. No one has ever come out while still active in the major leagues of football, baseball, basketball or hockey. There's ample evidence that the person who breaks down that barrier will face hostility from teammates and opponents.