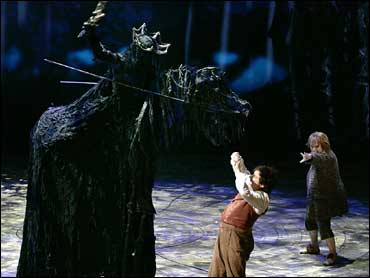 "The Lord of the Rings," the most expensive production in West End history, opened to a standing ovation from its audience, and mixed reviews from the critics, with some praising it as brilliant and a wonder, and others calling it "a thumping great flop" and corny.

The $25 million show based on Tolkien's literary trilogy about a Hobbit named Frodo and his quest to rid Middle-earth of evil, has been trimmed and reworked since its 2006 Toronto premiere, which also earned mixed reviews.

The Toronto Star, re-reviewing the musical in London said, "It's gotten better; it's gotten worse." While saying the story line was clearer, critic Richard Ouzounian added, "What has it lost? About 20 minutes of its running time and almost all of its heart."

But the show won the praise of some London critics.

The Times called the production a "wonder" and "a brave, stirring, epic piece of popular theater" complete with "charm, wit and jaw-dropping theatrical brio."

The Guardian said, "If Tolkien's trilogy is to be a stage spectacle, I don't see how it could be better done." It also praised the acting of Malcolm Storry as Gandalf, Brian Protheroe as Saruman and Andrew Jarvis as Elrond, "whose kingly voice resonates like thunder."

Judi Dench, who attended the premiere with other celebrities such as Andrew Lloyd Webber and Kevin Spacey, said: "For anyone who is a Tolkien fan, it is just a terrific treat. I have never seen the films, but I am a great fan of Tolkien's writing. It has wonderful choreography and the cast worked so hard."

Charles Spencer of The Daily Telegraph said that, while Michael Therriault's "charismatic and creepy" performance as Gollum was admirable, along with those of Frodo and Sam, the show was hated by his 14-year-old son, an avid fan of the Peter Jackson "Lord of the Rings" films.

"Its run, I fear, will be nasty, brutish and short," Spencer concluded.

The Independent called it an "inadequate Tolkien adaptation," and said the storytelling is rushed.

Using the headline "Flawed of the Rings," The Sun said the show's melodies were "tune-free" and the lyrics were "swamped" by the massive band. "Overblown, over-orchestrated and now over here," its critic said.

The Independent also praised Therriault as a "stand-out performer."

The Daily Mail said, "The set changes are multifarious, the dancing exuberant. ..." But it also said: "British adults will find it difficult to suppress open laughter at this show's Portentous Moments. Corny is hardly the word. There's more corn here than in Kansas."