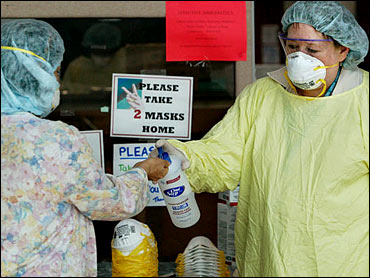 China reported no new cases of SARS for the first time in weeks, another sign the crisis may be easing in Asia, while nurses in Canada accused hospital officials of ignoring warnings of Toronto's latest outbreak.

"It's heartening. But it's not time to think that SARS has been beaten," said Bob Dietz, the World Health Organization spokesman in Beijing, after the Chinese Health Ministry reported no new cases for the first time since April. "No one should drop their guard yet."

Illustrating the toll severe acute respiratory syndrome has had on the medical community, Hong Kong said three health care workers have died in the past two days, the most recent a 30-year-old doctor.

The global death toll from severe acute respiratory syndrome rose to at least 771 on Monday after China reported two new deaths on its mainland and Hong Kong reported one. More than 8,300 people have been sickened by the flu-like illness, most of them in Asia.

But Thai Prime Minister Thaksin Shinawatra predicted that SARS will be contained by the end of this month and that regional economies will recover from its effects by the end of August.

"I think SARS itself is not as [bad] as the fear of SARS. The fear of SARS is outrageous," Thaksin said after the opening a two-day meeting of trade ministers of the 21-member Asia Pacific Economic Cooperation forum.

The ministers are expected to endorse an emergency plan to revive trade and tourism affected by SARS.

Singapore was removed from WHO's list of countries affected by the respiratory disease over the weekend, but the city-state's trade minister also urged vigilance.

"Yes, we had a celebration. But the assumption is, sooner or later it may come back and if it does come back we should be able to contain it quickly," George Yeo said.

The disease was first detected in November in southern China, and Chinese authorities were accused of initially trying to cover up the extent of the illness. They have since given WHO access to affected areas.

"It's fantastic," Dietz, the WHO spokesman in Beijing, said of the latest figures released by China. "It's part of the same trend we are seeing. We continue to feel that these figures are accurate for the provinces to which we've traveled."

"For the provinces to which we haven't gone, we're not sure but we assume China's making the same effort that they're making in the places that we have seen."

The deadliest outbreak outside Asia has been in Canada's largest city, Toronto, where authorities believed they had beaten the disease until a new cluster of infections was found in recent weeks in two city hospitals.

Nurses have accused officials at the city's North York General Hospital of dismissing warnings of a new wave of infections, the Toronto Star reported. The 16,000-member Registered Nurses Association of Ontario called for a "full review" of why hospital officials ignored the warnings.

"Our members were telling us of people with classic SARS symptoms coming into hospital. It appeared government was more focused on the protection of the Toronto tourist industry than the health of our health care workers and members of the public," Marcia Taylor, the Ontario Nurses Association vice president, told the Toronto Star.

Health officials said they did not have the authority to set up a public inquiry into the nurses' claims, but insisted they were ready to listen.

More than 5,700 people remained in quarantine Sunday in Toronto, where 31 people have died from the disease.

Officials in Taiwan's capital also were accused of negligence in the SARS battle, despite signs the island's outbreak is abating.

Chiu resigned last week amid criticism that Taipei's hospitals had been mismanaged and allowed SARS to spread.

Cheng Ha-yan, a doctor in Hong Kong, died of SARS on Sunday, becoming the eighth and youngest health care worker to be killed by the disease in the territory, officials said. A 53-year-old ward attendant and a 58-year-old doctor died Saturday.

Cheng volunteered to join the SARS team, said the Hospital Authority, which described her as a "kindhearted and patient-centered" doctor.

In Malaysia, meanwhile, authorities have refused to accept some 2,000 stray cats from neighboring Singapore that animal rights activists rescued from being killed in a cleanliness campaign aimed at fighting SARS.

Animal Lovers League in Singapore president Cathy Strong said the group was considering building a cat shelter in the city-state.

Most New Yorkers hesitant about returning to office life

Although New York City has beaten back COVID-19 for now, many buildings remain a "ghost town," employees say.