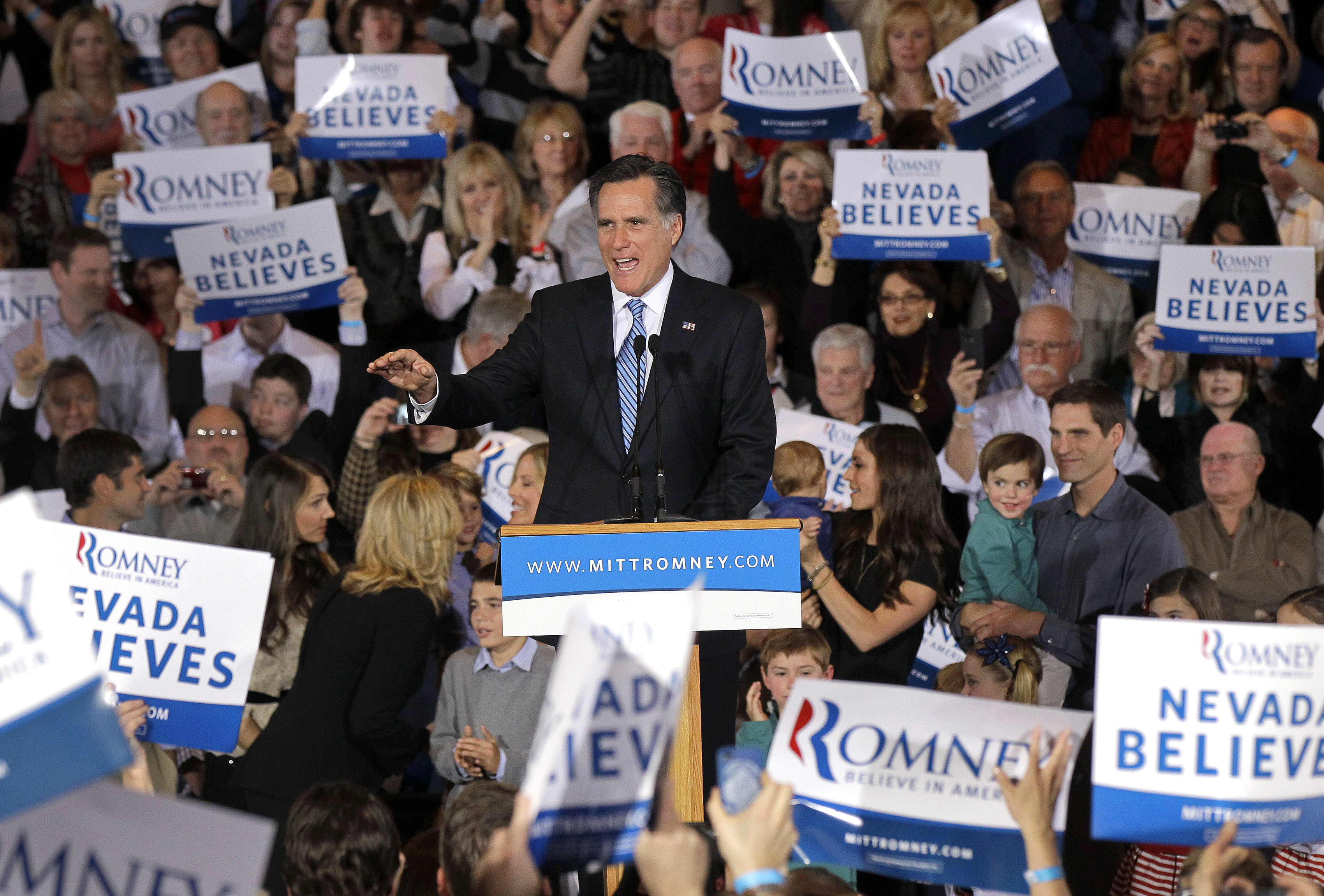 CBS News projects that Mitt Romney has won the Nevada Republican caucuses by a sizable margin, giving him his third victory in the race for the Republican presidential nomination.

In his victory speech from Las Vegas, Romney made clear he's looking ahead to the general election, focusing his remarks on President Obama rather than his Republican rivals.

"Four years ago candidate Obama came to Nevada promising to help," he said. "Mr. President, Nevada has had enough of your kind of help," he said

Noting that, in spite of recent improvements, the unemployment rate remains above 8 percent, Romney said, "We're not going to settle for a president who tells us it could be worse."

Romney to Obama: "Not so fast"

A victory in Nevada leaves the former Massachusetts governor primed for what should be a strong month for him: There are six more states that will hold their caucuses or primaries in February, and Romney won four of them in the 2008 Republican primary campaign. Additionally, since his win in Nevada was widely predicted, Romney got a head start campaigning in other upcoming states.

Still, the race is far from over. Not including Nevada's delegates, which will be awarded proportionally, Romney has just 80 at this point (and an additional 11 unpledged delegates) - far from the 1,144 needed to secure the GOP nomination. Even if he were to win every delegate starting with Nevada and going through Super Tuesday, Romney still wouldn't have enough delegates to clinch the nomination. (Ten states hold their contests on "Super Tuesday," which falls on March 6.)

CBS News entrance polling shows that Romney performed well across demographic groups in Nevada. He won among all age groups, except for voters between the ages of 17 and 29 -- Paul edged out Romney in that age group. Romney performed the best among all caucus-goers making over $30,000 a year; among those making less than $30,00, Romney essentially tied with Paul and Gingrich.

While February is likely to be a strong month for Romney, the Gingrich campaign says it's ready to keep moving. Nevada is just "one stop on a cross-country train of collecting delegates," Gingrich spokesman R.C. Hammond said. "Our job is to stop in every state and collect the delegates."

In a press conference Saturday night, Gingrich reassured reporters that he intends to take his campaign all the way to the Republican National Convention in Tampa.

He also hammered Romney, calling him a Massachusetts moderate" and remarking, "If the choice is Obama and Romney, then there's no choice."

Gingrich also blasted Romney for saying this week that he's "not concerned about the very poor."

Gingrich vows to go on following loss in Nevada

Gingrich chose to hold a press conference rather than a rally in Nevada Saturday night, since it was widely predicted that Romney would win. And in the days leading up to the Nevada contest, the Gingrich campaign focused fundraising in order to bolster its campaign coffers ahead of Super Tuesday.

Paul, meanwhile, has been focused on collecting delegates in states where his libertarian ideology gets the best reception. Four of the next seven nominating contests are caucuses -- like Nevada -- which gives Paul an advantage.

The congressman was already campaigning in Minnesota on Saturday, and his campaign boasted of drawing in more than 1,500 people to a rally at Bethel University. Minnesota and Colorado hold their caucuses on Tuesday.

Santorum was also looking ahead, campaigning in Colorado in Saturday.

"I think this is where the race begins to turn a little bit," Santorum said Saturday night on CNN. The former senator said he expects to win the nomination by convincing Republican voters that he's more electable. In all five states that have voted so far, voters have said that electability is the most important quality they're looking for in a candidate.

"They're going to see Mitt Romney and Newt Gingrich don't have what it takes to with the general election," he said. "They're looking for someone who has what it takes to beat Barack Obama... [and] the strong, conviction conservative presents the best chance to win."

CBS News entrance polling showed that 44 percent of Nevada Republican caucus-goers considered electability the most important quality in a candidate. Among those voters, 73 percent voted for Romney.