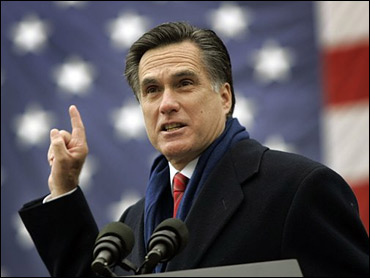 This column was written by Byron York


Some social conservatives in the important primary state of South Carolina are expressing skepticism about Republican presidential candidate Mitt Romney after reports of statements from the Massachusetts governor that were pro-choice, in favor of expansive gay rights, and dismissive of Ronald Reagan.

For some, the concern stems not from any single, disqualifying position, but rather a combination of statements from Romney's political career. "When it becomes a pattern, that's what causes people to be fearful," says Oran Smith, head of the pro-life Palmetto Family Council, who has not committed to any candidate in the race. "The Reagan thing, the abortion thing, the gay thing — if you mix all of that together, is there a pattern?"

The first statement to which Smith refers is one that is being e-mailed around Republican circles these days. It is from Romney's now-famous debate with Massachusetts Sen. Edward Kennedy during the 1994 Senate campaign. In the debate, Kennedy tried to portray Romney as a turn-back-the-clock conservative, and Romney took exception, essentially disavowing Reagan. On October 27, 1994, the Boston Herald reported the exchange this way:

Kennedy attempted to link Romney several times during the debate to conservatives such as Sen. Jesse Helms (R-N.C.) and accused him of trying to return the country to the policies of the Reagan-Bush administrations.

Romney objected to the characterizations, saying: "I was an independent during the time of Reagan-Bush. I'm not trying to return to Reagan-Bush."

Romney has sought throughout the campaign to portray himself as a "Bill Weld Republican" who is liberal on social issues and conservative on fiscal matters.

"You cannot slam Ronald Reagan or disrespect Ronald Reagan in a state like South Carolina," says Ed McMullen, head of the economically-oriented South Carolina Policy Council. "This man is the true ideological backbone of what Republicans in South Carolina believe." (Neither the Council nor McMullen has endorsed a candidate for 2008, although McMullen supported Sen. John McCain in 2000.) "Ronald Reagan has an almost deity status," adds David Woodard, a professor of political science at Clemson who is not aligned with any campaign. "It's the kind of status, with the core base in South Carolina, where everyone expects to hear a Republican politician say something nice about Reagan." A number of GOP activists say Romney's Reagan comments, although they have not received any press coverage, are circulating widely among South Carolina conservatives.

"The governor has said that one of his political heroes is Ronald Reagan," Romney spokesman Jared Young tells National Review Online. "I don't know how that squares with what he said in '94, but I do know that he greatly respects Ronald Reagan and his vision and leadership for America, and would fancy himself to be a similar type of person."

On abortion, social conservatives are trying to digest statements made by Romney in 2002, during his successful campaign for Massachusetts governor, and also during the 1994 Senate race. In 2002, Romney wrote, in a questionnaire from the National Abortion Rights Action League, that, "I respect and will protect a woman's right to choose. This choice is a deeply personal one. Women should be free to choose based on their own beliefs, not mine and not the government's."

Pro-choice activists who interviewed Romney at the time remember an unmistakable commitment to abortion rights. "He was very clear about wanting to make clear that he was pro-choice," recalls Melissa Kogut, executive director of NARAL Pro-Choice Massachusetts. "He clearly was convincing us that he was pro-choice, and he was aggressive about it."

In 1994, in the same debate with Kennedy that is now receiving new attention, Romney left no doubt about his position on abortion:

I believe that abortion should be safe and legal in this country. I have since the time that my mom took that position when she ran in 1970 as a U.S. Senate candidate. I believe that since Roe v. Wade has been the law for 20 years we should sustain and support it.

Romney says he changed his mind on abortion in late 2004 after meeting with experts on the issue of stem cell research. "At one point, the experts pointed out that embryonic-stem-cell research should not be a moral issue because the embryos were destroyed at 14 days," Romney told National Review Online last week. "After the meeting I looked over at Beth Myers, my chief of staff, and we both had exactly the same reaction — it just hit us hard just how much the sanctity of life had been cheapened by virtue of the Roe v. Wade mentality. And from that point forward, I said to the people of Massachusetts, 'I will continue to honor what I pledged to you, but I prefer to call myself pro-life.'"

Romney's description of his conversion strikes some activists on both sides of the abortion issue as unusual. "People do change their minds," says the pro-choice Kogut. "I've seen it. But this is different. It seems completely timed with his presidential ambitions." Oran Smith, pro-life, questions Romney's explanation in a more subtle way. In talks with conservative Christians, Smith points out, Romney has often addressed the issue of his Mormon faith by saying something to the effect of, "Our faiths are different, but they bring us to the same positions on the issues." But by all accounts, Romney was a faithful Mormon when he was solidly pro-choice, and he is a faithful Mormon today when he is solidly pro-life. How, precisely, did his faith bring him to different positions, then and now? "Christians generally like for someone to have a conversion experience and a mea culpa moment," says Smith. "But he doesn't have that to turn to. He can't say, 'My faith changed, and therefore my views changed.' That's the normal thing with Republicans who move to the right on some issues — they claim to have had some spiritual transformation."

Another problem Romney might have is the sheer recent-ness of his change of views, which occurred at virtually the same moment Romney was making early moves in South Carolina. A change itself is not that unusual, says David Woodard, but the timing is. "There are a lot of conversion stories," Woodard says, "people who say, 'I was pro-choice until my daughter got pregnant,' or 'I was pro-choice until a friend got pregnant,' and then they had a lot of misgivings. That worked in the '80s, or the early '90s, but in 2004, after this issue has been aired for many years? It's going to be harder."

As for gay rights, conservatives have been assessing Romney's pledge in a 1994 letter to the Log Cabin Republicans, that, "as we seek to establish full equality for America's gay and lesbian citizens, I will provide more effective leadership than my opponent," referring to Kennedy. They are also looking at his support of the Employment Non-Discrimination Act (ENDA) and his stand in 2003 that, although he opposed gay marriage, he would, in the words of a Washington Times report from November of that year, "support a Vermont-style civil union law in Massachusetts." In addition, Romney's administration supported a range of gay-friendly policies that are outlined in a long and hostile report on his record, "The Mitt Romney Deception," by Massachusetts conservative Brian Camenker, that is also circulating among conservatives.

On the other hand, Oran Smith notes that Romney was a source of strong support in the successful drive to amend South Carolina's constitution to define marriage as the union of one man and one woman. "When we were putting on our marriage amendment campaign, he spoke to a luncheon on our behalf and was extremely strong and aggressive in helping us raise funds," Smith recalls. "I was very impressed with his willingness to help."

Still, after all the recent revelations, it appears Romney has some serious repair work to do in South Carolina, and among social conservatives in general. Romney has campaigned hard in the state, but he has yet to break into the top tier of candidates. By a number of assessments of public opinion, he stands fourth among possible candidates, behind McCain, former New York Mayor Rudy Giuliani, and former House Speaker Newt Gingrich (although that is better than the fifth place Romney was in before outgoing Senate Majority Leader Bill Frist announced he would not run.)

"I don't think the door has slammed on Romney because of these things," says Oran Smith. "But people are still sorting it out."