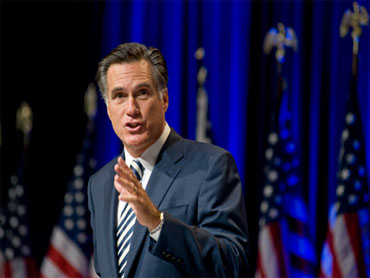 Mitt Romney has penned an op-ed for USA Today in which he sharply criticizes President Obama for what Romney sees as a lack of leadership around the oil spill in the Gulf.

"We have become accustomed to his management style -- target a scapegoat, assign blame and go on the attack," Romney writes, before criticizing the president because he "vilified insurance executives" in the health care debate, "demonized" General Motors lenders, and "blames Wall Street and George W. Bush" for the economic downturn.

"What may make good politics does not make good leadership," Romney writes. "And when a crisis is upon us, America wants a leader, not a politician."

Romney, who attacked Mr. Obama for what he sees as an unfounded desire to apologize for America in his book "No Apology," goes on to contrast the leadership of then-New York City mayor Rudy Giuliani after Sept. 11th - Romney writes that Giuliani "didn't hole up in his office or retreat to his residence" - with that of the president today.

"The president has many critical matters that demand his attention, but brief and tardy tours and being photographed with a smudge of oil on a sandy beach don't work on any level," Romney writes. "There is no substitute for being there."

Mr. Obama will make his fourth visit to the Gulf region on Monday.

In the op-ed, called "We need a leader, not a politician," the former GOP presidential hopeful, who is expected to run again in 2012, writes that Mr. Obama needs to acknowledge "that it is at his desk where the buck stops."

"President Obama's instigation of criminal investigations of BP at this juncture is classic diversion politics -- and worse, it will engender bunker mentality at a time when collaboration and openness are most critical," he writes. "BP's actions and inactions are reprehensible; it must be made to pay the billions upon billions of dollars that this spill will ultimately cost. But call out the phalanx of lawyers later -- solve the crisis today."