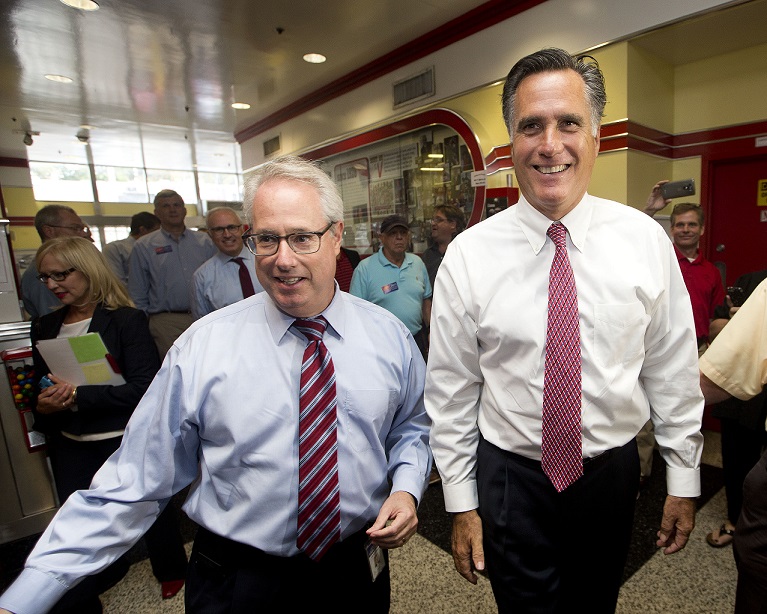 Less than a month from the midterm elections, there is one man out on the campaign trail almost as much as the candidates themselves.

You could call it the "Romney redemption tour." He's hit six states in just the past eight days.

He is the most sought after Republican on the campaign trail and has been asked to campaign for everyone from the top Senate republican, to Georgia's Attorney General.

"Are you going to vote for that man?" Attorney General Sam Olens called out to the crowd, who erupted in cheers. "Alright, good to hear it!"

In all, Romney has headlined 44 fundraisers and campaign events this year in 21 states. And even though he's stumping for others, the 67-year-old former Massachusetts governor is clearly enjoying being the center of attention, posing for pictures, and signing books.

The crowd even applauded at a diner in Atlanta when he sat down to have a hot dog.

The president, by contrast, has not appeared at a rally for a Democrat since November of last year.

He did shoot pool with Colorado's Democratic governor this summer, but Colorado Senator Mark Udall, who is also up for reelection, took a pass, and frequently highlights his differences with a president whose approval ratings in the state have dropped to 39 percent.

"Look, I think we're all big boys and girls and we don't always agree, and that's what's really wonderful about Colorado," he said. "We have a spirited conversation here."

Polls confirm Romney is having a moment.

53 percent of Americans said in July that if the election were held again, they'd vote for Romney, who set off fresh speculation when he told radio host Hugh Hewitt "I'm not running," but added that "circumstances can change."

Nevertheless, he assured there won't be a 2016.

"I'm not running," he said. "I'm going to be helping someone else who is. We don't know who that is yet but we're going to get a good Republican in there."

Democrats point out the President has headlined 55 party fundraisers this year, and they say he will campaign in at least one state before November 4.

But Romney is pretty clear-eyed about all the 2016 buzz. He's joked that it's kind of like dating; the unavailable one is always the most attractive.