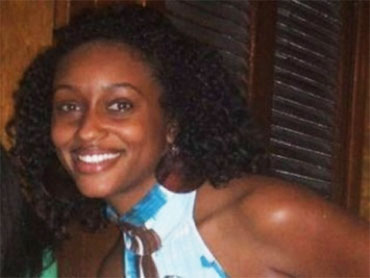 MALIBU, Calif. (CBS) A woman who was arrested at a Malibu, Calif. restaurant went missing after she was released hours later from a sheriff's station, the Los Angeles Times reported.

Mitrice Richardson, 24, was reportedly intoxicated and unable to pay her $89 bill at Geoffrey's restaurant on Pacific Coast Highway in Malibu about 10 p.m. Thursday, Sept. 17, the newspaper reported.

Deputies arrested Richardson at the Malibu-Lost Hills station, where they booked her on suspicion of not paying for the meal and possession of less than an ounce of marijuana, sheriff's spokesman Steve Whitmore told the Los Angeles Times.

"She exhibited no signs of mental illness or intoxication," said Whitmore, explaining why she was released. "She was fine. She's an adult."

According to her mother, Latice Sutton, a manager she spoke to at Geoffrey's said Richardson appeared to be in "no condition to drive."

Sutton told the newspaper that she called the Malibu-Lost Hills station to ask about posting bail and picking up her daughter, but deputies told her they had released her because they did not have room to keep her in jail.

The sheriff's station is unfamiliar to the woman, her family said. It is not served by buses at night, and family members said they have not seen or heard from Richardson since Wednesday.

"They allowed her to walk out of that facility and down that road in the pitch black night," Richardson's father, Michael, told the Times. "That's not right. Now, I just want to find my child."

The woman's mother said deputies told her nearby residents had called to say a woman was sleeping on porches, indicating to her that Richardson was stumbling around a nearby residential neighborhood early Friday, the Times reported.

Responding to criticism from Richardson's family, the Sheriff's Department defended her release in a statement made by Whitmore. He said the department has a series of checks that are done before anybody is released and that those checks were done, again noting she was neither intoxicated nor mentally impaired.

Whitmore also said Richardson was made an offer to stay in the jail but she refused.

Richardson is a graduate of Cal State Fullerton and recently moved to Los Angeles to live with her grandmother near the area where she planned on teaching.

She last made contact with her family at her home in the Southeast area of Los Angeles on Wednesday, police said.

Richardson is African-American, 5-foot-5-inches and approximately 135 pounds. She has brown, curly hair and hazel eyes, and was last seen wearing a dark shirt and blue jeans, police said. According to a flyer made by her family, Richardson has tattoos on her lower abdomen and behind her neck.