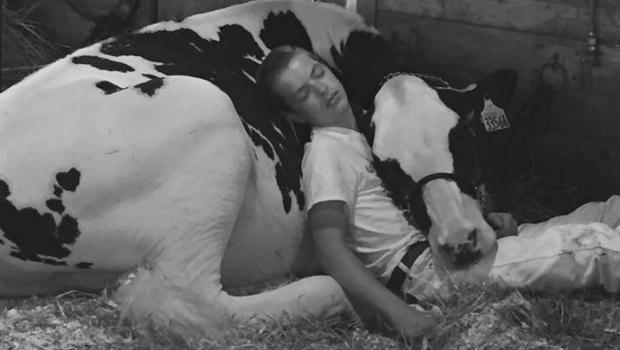 A boy and his cow didn't snag the top prize at the Iowa State Fair last weekend, but a photo of them taking a nap together after the contest is winning over the internet.

Mitchell Miner, 15, and his heifer, Audri, spent most of the summer together and formed a special connection during that time.

"She likes to lay down quite a bit," Miner told the Des Moines Register. "She just enjoys my company."

The teen from Williamsburg, Iowa, entered Audri into a youth dairy cattle show at the Iowa State Fair in Des Moines. In the weeks leading up to the competition, he led, clipped, walked and bathed her.

Even on the day of the showing on Sunday, he woke up at 3 a.m. to finish getting her ready, making it his third straight day doing so.

Despite the long hours and hard work, Audri finished fifth out of seven contestants at the competition.

Both were exhausted after the event and took a nap inside a barn, where his father, Jeremy Miner, snapped pictures of them cuddling up. He posted a photo of the pair on Facebook on Sunday with the caption, "Our son Mitchell and his heifer after showing yesterday."

The post went viral and as of Tuesday it has tallied more than 24,000 likes, 2,500 shares and hundreds of comments, many which thanked the elder Miner for showing off the photo.

Laura, Miner's mother, told the Register her family borrows animals for the summertime. She said the photo's popularity is due to people enjoying the close-knit bond between a child and their animal.

"I think it's just when you spend that much time with them, they get really comfortable," she said.

Both of Miner's parents grew up in the farm, but are the first generation to live outside of one. They want to continue to foster values taught on the farmland.

"We learned a lot from the farm," Jeremy said. "We have those values instilled in us and we are trying to do what we can to preserve that."

Audri will return to a dairy farm in autumn after the family's final showing in September.