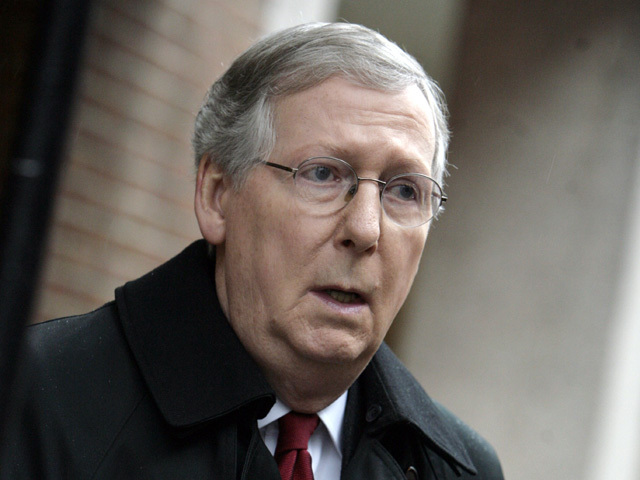 Senate Minority Leader Mitch McConnell (R-Ky.) and other Republicans have been making the argument that the effort by President Obama and Democrats to reform the financial industry is actually a way to institute "endless taxpayer funded bailouts for big Wall Street banks," as McConnell put it on Tuesday.

The claim echoes advice from Republican pollster Frank Luntz to members of the GOP who oppose the financial industry reform bill to label it a "bailout" bill. The advice prompted White House deputy communications director Jen Psaki to suggest on the White House web site that McConnell is simply following Luntz' marching orders. "No matter what the bill actually does, they're going to call it a bailout because that's what the polls tell them to do," she wrote.

On Wednesday, McConnell was asked by a reporter if he is "doing the bidding of the large banks." McConnell receives more money in donations from the "Finance, Insurance and Real Estate" sector than any other sector, according to the Center for Responsive Politics.

"There was a report that you guys met with hedge fund managers in New York," a questioner said to McConnell. "A lot of people are viewing this particular line of argument, this bailout argument as spin..."

McConnell responded that "you could talk to the community bankers in Kentucky."

"Well, sure. We talk to people all the time," McConnell replied. "I'm not denying that. What's wrong with that? I mean, that's how we learn how people feel about legislation. But the community bankers in Kentucky, the little guys, the main street guys, are overwhelmingly opposed to this bill."

"What do you say to folks this is just meant to deflect attention from the fact you're representing the large banks?" he was asked.

The Associated Press reported Thursday that Republican claims that the bill is a bailout bill has some support from across the political spectrum, though "no one can be sure" if they are true.

McConnell argues that the proposed $50 billion, bank-funded fund that would be used to liquidate financial firms that could collapse "would of course immediately signal to everyone that the government is ready to bail out large banks."

In October, Treasury Secretary Timothy Geithner said "a standing fund would create expectations that the government would step in to protect shareholders and creditors from losses," as the AP notes -- though since the fund proposed in the regulatory reform bill would be financed by banks, the proposed bill would presumably not require the government to fund any bailout.