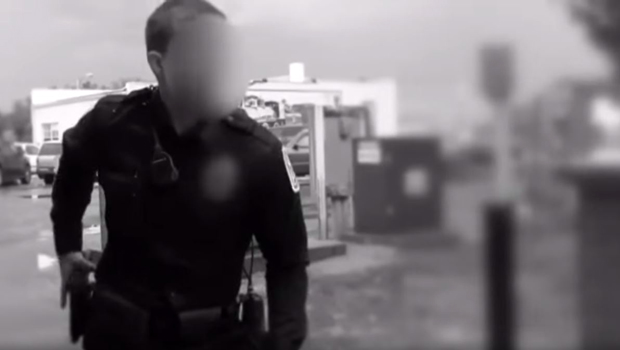 KANSAS CITY, Mo. -- A white Missouri police officer has been placed on unpaid leave after he appeared in a racially charged music video wearing his uniform and carrying a sign reading "cops lives matter."

St. Joseph patrolman Zackary Craft also is seen reaching for his gun in the video for "Before This Bomb Blows Up (Racism Goes Both Ways)" by Josh Smith, a white rapper from the Kansas City suburb of Independence who performs as J.Smitty. (Warning: The video, which is on YouTube, contains offensive language.)

"The department in no way condones the video in its entirety," said police spokesman Capt. Jeff Wilson. He said Craft is on leave pending a due-process hearing but declined to say when the hearing would take place or how the video came to the department's attention.

Smith said he took down the video when Craft was suspended last week but reposted it Thursday with Craft's face blurred.

Craft's attorney, Morgan Roach, said in a statement that Craft allowed himself to be filmed "without knowing the words, content, or context" and was "appalled" when he saw the video.

"He whole-heartedly rejects the song, the music video, and the misguided message in its entirety," Roach wrote. He said Craft is not doing interviews.

The video shows Smith rapping about how "racism goes both ways" as he spits on a picture of the Rev. Al Sharpton and breaks pictures of the Rev. Jesse Jackson, President Obama and hooded KKK members. He then burns the images. Craft also is seen holding hand-written placards reading "right is right" and "wrong is wrong."

Smith said that Craft, whom he described as a friend, knew the video was "supposed to make cops look good" but didn't know "quite how far it was going to go."

"I feel really bad for him," Smith said. "I hope this all ends well for him and that he is able to keep his job and move on."

The incident follows other racial police disciplinary issues that have happened since the August 2014 shooting death of Michael Brown in the St. Louis suburb of Ferguson, which helped fuel the national "Black Lives Matter" movement.

A white police officer shot and killed Brown, an unarmed black 18-year-old, during a confrontation in a street. The Justice Department later cleared the officer, concluding evidence backed his claim that he shot Brown in self-defense after Brown tried to grab his gun during a struggle, then came toward him threateningly after briefly running away.

Police in St. Paul, Minnesota, on Wednesday announced the resignation of an officer who posted a message on Facebook urging drivers to run over protesters who rallied against the police killings of two black men in the Twin Cities last year.