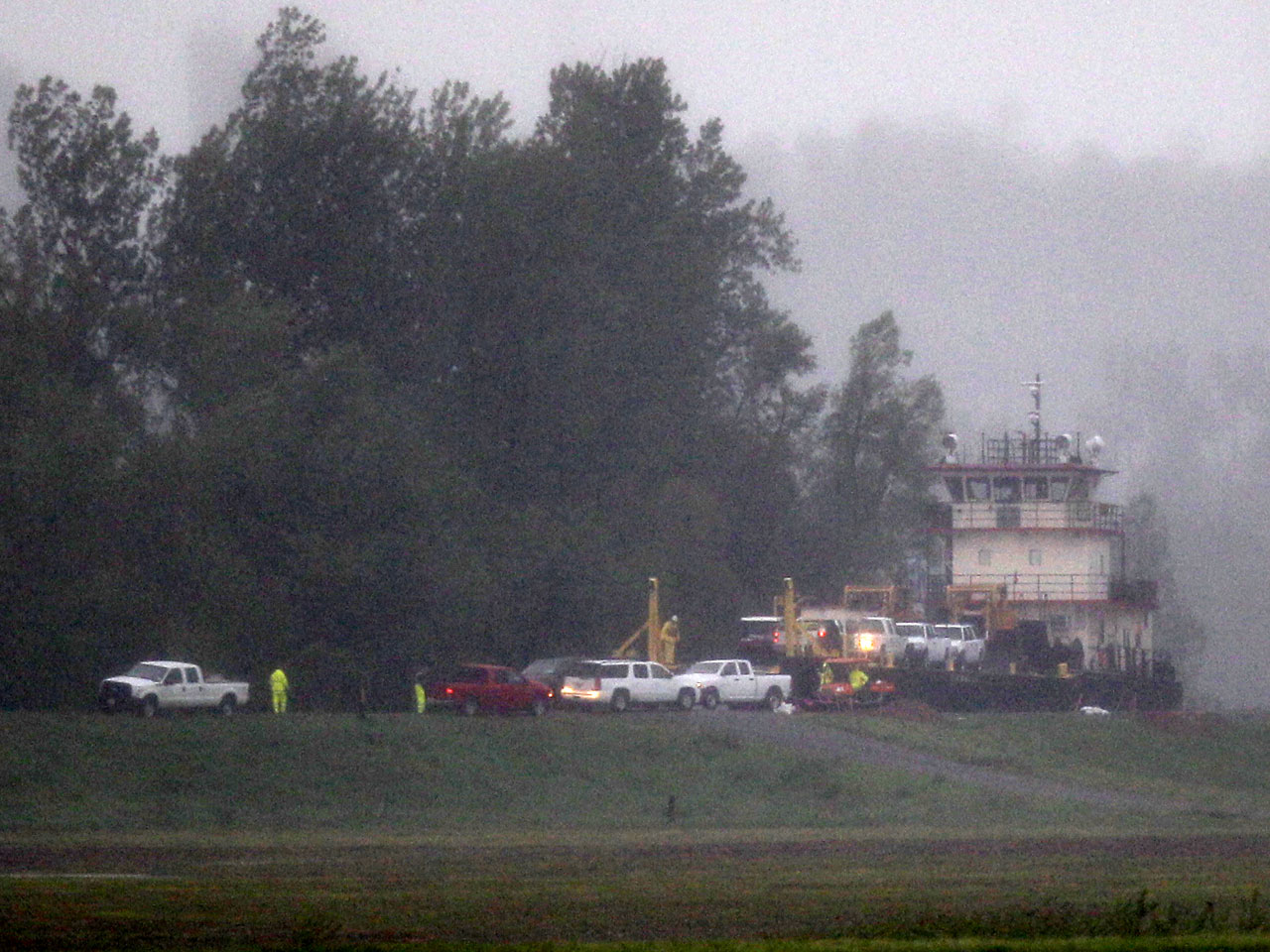 WYATT, Mo. — The U.S. Army Corps of Engineers exploded a large section of a Mississippi River levee Monday in a desperate attempt to protect an Illinois town from rising floodwaters.

The corps said the break in the Birds Point levee would help tiny Cairo, Ill., by diverting up to 4 feet of water off the river. Just before Monday night's explosions, river levels at Cairo were at historic highs and creating pressure on the floodwall protecting the town.

For the Missouri side, the blasts were likely unleashing a muddy torrent into empty farm fields and around evacuated homes in Mississippi County.

Brief but bright orange flashes could be seen above the river as the explosions went off just after 10 p.m. The blasts lasted only about two seconds. Darkness kept reporters, who were more than a half mile off the river, from seeing how fast the water was moving into the farmland.

Engineers carried out the blast after spending hours pumping liquid explosives into the levee. More explosions were planned for overnight and midday Tuesday, though most of the damage was expected to be done by the first blast.

But questions remain about whether breaking open the levee would provide the relief needed, and how much water the blast would divert from the Mississippi River as more rain was forecast to fall on the region Tuesday. The seemingly endless rain has overwhelmed rivers and strained levees, including the one protecting Cairo, at the confluence of the Ohio and Mississippi rivers.

Flooding concerns also were widespread Monday in western Tennessee, where tributaries were backed up due to heavy rains and the bulging Mississippi River. Streets in suburban Memphis were blocked, and some 175 people filled a church gymnasium to brace for potential record flooding.

The break at Birds Point was expected to do little to ease the flood dangers there, Tennessee officials said.

The Ohio River at Cairo had climbed to more than 61 feet as of Monday, a day after eclipsing the 1937 record of 59.5 feet.

The river was expected to crest late Wednesday or early Thursday at 63 feet — just a foot below the level that Cairo's floodwall is built to hold back — before starting a slow decline by Friday.

The high water has raised concerns about the strain on the floodwalls in Cairo and other cities. The agency has been weighing for days whether to blow open the Birds Point levee, which would inundate 130,000 acres of Missouri farmland.

Engineers believe sacrificing the levee could reduce the water levels at Cairo by about 4 feet in less than two days. Meteorologist Beverly Poole of the National Weather Service put the figure closer to five feet.

"These are uncharted territories, but it would be very fast," she said.

Carlin Bennett, the presiding Mississippi County commissioner, said he was told a 10- to 15-foot wall of water would come pouring through the breach. The demolition was expected to cover about 11,000 feet of the levee.

Maj. Gen. Michael Walsh — the man ultimately responsible for the decision to go through with the plan- has indicated that he may not stop there if blasting open the levee doesn't do the trick. In recent days, Walsh has said he might also make use of other downstream "floodways" — basins surrounded by levees that can intentionally be blown open to divert floodwaters.

Among those that could be tapped are the 58-year-old Morganza floodway near Morgan City, La., and the Bonnet Carre floodway about 30 miles north of New Orleans. The Morganza has been pressed into service just once, in 1973. The Bonnet Carre, which was christened in 1932 has been opened up nine times since 1937, the most recent in 2008.

"Making this decision is not easy or hard," Walsh said. "It's simply grave — because the decision leads to loss of property and livelihood, either in a floodway or in an area that was not designed to flood."

Officials in Louisiana and Mississippi are warning that the river could bring a surge of water unseen since the Great Mississippi Flood of 1927.

The corps has said about 241 miles of levees along the Mississippi River between Cape Girardeau, Mo., and the Gulf of Mexico need to be made taller or strengthened.

George Sills, a former Army Corps engineer and levee expert in Vicksburg, Miss., said the volume of water moving down the river would test the levee system south of Memphis into Louisiana.

"It's been a long time since we've seen a major flood down the Mississippi River," Sills said. "This is the highest river in Vicksburg, Miss., since 1927. There will be water coming by here that most people have never seen in their lifetime."

He said the Army Corps has warned residents that waters levels in Eagle Lake, an oxbow lake of the Mississippi River, will rise exceptionally high, and that could stress a federal levee with a history of problems.

"They're taking some extreme measures to save it," he said.

But few measures could be as drastic as the one at Birds Point.

Bob Holmes, a hydrologist with the U.S. Geological Survey, said using such levees as relief valves can be vital, likening swollen rivers to traffic bottlenecked to one lane in freeway construction zones. Remove the barricades, he says, and things flow more freely.

"I can tell you that when you can open up the flow path and have additional conveyance, you're going to lower the elevations upstream," he said.

Holmes declined to talk specifically about the Birds Point matter, saying the corps was more versed in the computations used to decide the levee's fate.

"For me to make any kind of a guess would be irresponsible," he said. "All this extra rain threw a monkey wrench into it."

Missouri's legal bid to block the breach was rejected by federal courts including the U.S. Supreme Court, which on Sunday refused to intervene.

Missouri officials said the incoming water would crush the region's economy and environment by possibly covering the land under sand and silt and rendering it useless.

Bob Byrne, 59, farms 550 acres below the Missouri levee and called news about the pending break "devastating."

"It's a sickening feeling," he said. "They're talking about not getting the water off until late July or early August. That knocks out a whole season."

Rep. JoAnn Emerson, who represents the southeast Missouri area in Congress, said Monday she had spoken to Agriculture Secretary Tom Vilsack, who told her that farmers with crop insurance would be treated the same as if the flood were a natural disaster.

There were other trouble spots Monday, both on the Mississippi and elsewhere in southern Missouri, where rains last week overran a levee protecting the town of Poplar Bluff.

In Olive Branch, about 17 miles northwest of Cairo, the Mississippi River overtook a levee, further drowning the tiny outpost where locals spent recent days erecting walls of sandbags around homes.

In the southern Illinois communities of Metropolis and Old Shawneetown, voluntary evacuations were under way. State officials went door-to-door by boat in some places telling people to leave.